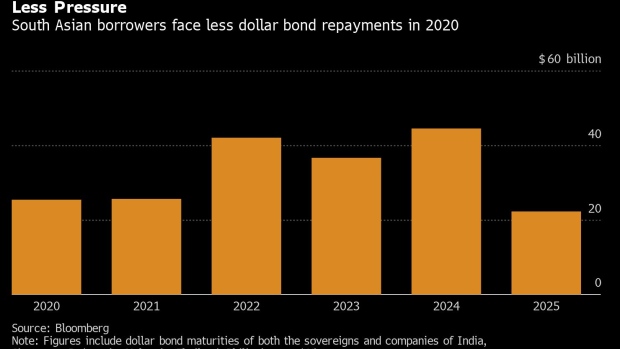 Pedestrians wearing protective masks walk across a road in Mumbai, India, on Saturday, March 21, 2020. Authorities ordered all non-essential businesses in Mumbai and across the broader state to shut from midnight through the end of March to contain the spread of the novel coronavirus. Photographer: Dhiraj Singh/Bloomberg , Bloomberg

(Bloomberg) -- As a dollar crunch sweeps the globe, cracks are starting to show up in Asia’s emerging markets, despite the hefty foreign reserve cushions built up over the years.

Southeast Asian governments and corporates as well as India, which have reduced their dollar debt in the past year to $25.4 billion due in 2020, will face a 65% jump in payments to $41.9 billion in 2022, according to Bloomberg data. Dollar payments are expected to reach a peak of $44.4 billion in 2024.

While the Federal Reserve has ventured into unchartered territory to fight a slowdown in the world’s largest economy, Indonesia, Malaysia, and India are raising red flags for analysts as the coronavirus outbreak shutters large parts of their economies, currencies plunge and governments push to widen their fiscal deficits. It’s all a wakeup call for emerging Asia, which has been seen as relatively sheltered compared to peers globally, given flush foreign reserves, current-account surpluses in many countries and regional swap lines to tap on in crisis.

“No one is facing imminent balance of payments pressure here,” said Christian de Guzman, senior vice president at Moody’s Investors Service in Singapore. “But given the way markets are right now the option of refinancing for them may be a bit difficult. There’s already some pressure on their local currencies. The cost of funding may have actually increased.”

Indonesia and India are of particular concern, given the twin deficits on their budget and current accounts, which make them more reliant on foreign inflows than peers.

Fiscal pressures are building in Indonesia, where the government is considering lifting its deficit cap to 5% of GDP from 3%. The central bank is predicting the current account deficit will come in at 2.5%-3% of GDP this year, and foreigners own 35% of Indonesian local-currency government bonds, among the highest in Asia based on available data.

The rupiah has taken a beating, weakening more than 15% against the dollar so far this year, making it the worst-performing currency in Asia. That will put pressure on companies refinancing their dollar debt, said Xavier Jean, senior director for corporate ratings, at S&P Global Ratings in Singapore.

“The credit quality of Indonesian companies as a whole has been steadily declining over the past three years because of steady capital spending, growing debt, intense competitive pressure and more challenging operating conditions, especially in the real estate sector,” he said.

Almost one-third of the credit ratings in the Indonesian corporate sector, excluding state-owned firms, are on negative outlook -- signaling further deterioration in their credit profile over the next three to 12 months, Jean said. That’s the highest level since the global financial crisis, he added.

In India, similar pressures are building. Global funds have sold net $6.8 billion of rupee-denominated debt so far this month through March 20, based on data compiled by Bloomberg. The rupee has plunged to an all-time low and stocks fell by a record Monday after the government moved to lock down the country of 1.3 billion people.

The market sell-offs show both Indonesia and India as being the “most, and increasingly, troubled,” said Vishnu Varathan, head of economics and strategy at Mizuho Bank Ltd. in Singapore. Currency plunges and external debt servicing are problems that could compound one another, he said.

The central banks in both countries have been accelerating steps to shield the economy from the market fallout. Indonesia has cut interest rates twice this year, increased intervention in the currency market and purchased bonds from the secondary market. The Reserve Bank of India has pumped liquidity into the banking system.

Natixis SA highlights risks around Malaysia, assessing it as one of the least liquid of 11 economies in the region, according to a March 18 note by chief Asia-Pacific economist Alicia Garcia Herrero and emerging Asia senior economist Trinh Nguyen.

Malaysia’s high reliance on foreign income -- including commodities exports that account for 15% of GDP, and shipments of intermediate goods that are 49.5% of GDP -- make it particularly vulnerable, according to Natixis.

“Beyond the immediate liquidity squeeze coming from the global credit crunch via the capital account, the decline of commodity prices is adding another pressure,” the Natixis analysts wrote. For commodity-reliant economies like Malaysia, “the contraction of earnings and USD will impact these exporters and the economy.”