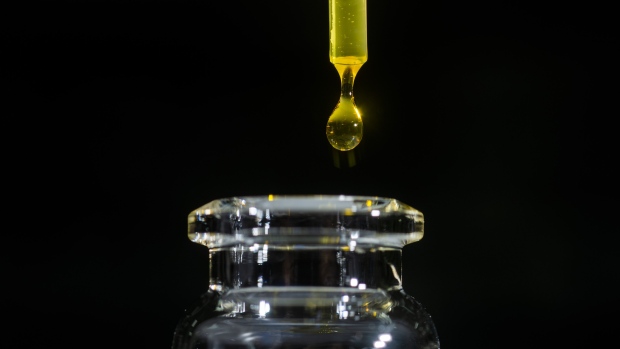 A technician drops a sample of cannabidiol (CBD) from a pipette into a jar inside the LuCan laboratory facility in Maseru, Lesotho, on Thursday, Nov. 14, 2019. The Lesotho government is trying to spur development of legal plantations supplying the burgeoning global medical cannabis industry to broaden its tax basecurrently dominated by exports of diamonds, water and wooland create jobs. Photographer: Bloomberg/Bloomberg , Photographer: Bloomberg/Bloomberg

(Bloomberg) -- Canopy Growth Corp. just completed one of the first major studies on the lifelong effects of CBD use and found it lengthens life and increases activity in old age -- well, in worms.

While the results were promising, the use of organisms with two-week lifespans shows just how hard the industry is working to try and keep up with demand for hard science, which has been outpaced by consumer hype. After all, CBD is already used by millions of people around the world for conditions like insomnia and anxiety, and there’s been little research in humans on its long-term safety or even its effectiveness.

The U.S. Food and Drug Administration said this past week that the substance’s varying effects on men and women will influence its regulation, but has yet to lay out just how. For now, that’s leaving companies like Canopy to fill the research gap, which could ultimately help the FDA decide how to regulate it.

Canopy’s study, likely to be released this week, found no sign of toxic effects from CBD, even when used over the worms’ entire lives. The short-lived animals are commonly used in early-stage tests in the pharmaceutical industry to screen for toxic effects when working with novel compounds.

None of the 3,504 C. Elegans worms in the Canopy study died prematurely compared to a control group, even at significantly elevated doses -- a good sign for CBD’s safety, said Hunter Land, a senior director of science at Canopy. Better still, at doses in the range of human consumption, CBD extended the tiny roundworms’ lives by 18%, and they showed an increase in activity of 206%.

“As they aged, they moved more like young animals,” Land, who designed the study, explained in a phone interview. “Rather than seeing something toxic, we see the opposite -- it actually increases health parameters.”

The study is one of a series that Canopy is working on to evaluate CBD. It already sells products like Martha Stewart-branded gummies and tinctures. The company also has a partnership with beer-maker Constellation Brands and is moving into CBD drinks.

Other companies focused on the compound are also doing research. CBDMD Inc. Chief Executive Officer Martin Sumichrast said it’s working with other companies on studies to be announced in coming months.

Clinical interest in CBD -- for decades seen as the boring stepsister of THC, cannabis’ psychoactive ingredient -- has been growing since a pair of major developments in 2018. That year, regulators approved the CBD drug Epidiolex to treat epilepsy, piqueing scientists’ interest again, and new legislation took CBD off the list of Schedule 1 drugs, making it easier for labs to experiment.

Read More: How to Become the ‘Coke’ of CBD Brands: Don’t Mention CBD at All

CBD is still far less understood than THC, according to Staci Gruber, an associate professor of psychiatry at Harvard Medical School who studies marijuana’s cognitive effects. Speaking generally about the state of CBD science and without knowledge of the Canopy study, she said she’s not aware of any studies on humans and CBD toxicity.

Given the number of people now using it on a daily basis -- particularly elderly people who may be taking other medications and have slower metabolism -- more work is needed, she said. “In general it’s recognized as a fairly safe substance, but people assume it’s completely safe, and I’m here to tell you if you take certain medications you shouldn’t assume that.”

Allyn Howlett, a professor at Wake Forest School of Medicine known for her discovery of a receptor in the brain that responds to cannabinoids, said even the biological basis for CBD’s effects isn’t well understood yet. There could be concerns about neural development and other complex issues that aren’t caught in simple animal studies, she said.

“We need human studies if Americans want to protect themselves,” Howlett said.

“In addition to CBD’s proven effects in certain forms of epilepsy, there is a modest and growing clinical literature suggesting positive effects of CBD for anxiety, and a smaller evidence base for its potential use in certain substance use disorders and for pain. But these data are still very preliminary. Animal studies allow for greater control over dosing and frequency, and can help determine CBD’s mechanisms of action (which are still unclear); but they are limited in their generalizability to humans,” said Dr. Susan Weiss, director of extramural research at the National Institute on Drug Abuse, in an email exchange about the state of CBD research.