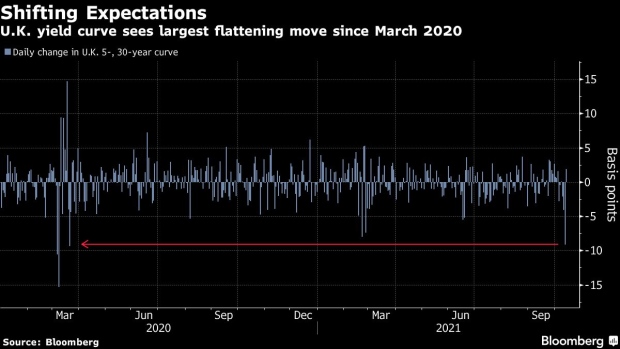 (Bloomberg) -- The U.K. bond yield curve is the latest reflection of concern that any rapid policy tightening will end up hurting growth.

Long-end gilt yields held declines on Thursday, a day after plummeting by the most since March 2020. That has diminished their gap versus two-year rates and five-year equivalents to the narrowest in at least a year, often seen as a sign that the market’s sense of the economy is turning less optimistic.

Read More: Why Yield Curves Can Be Bull or Bear, Flat or Steep: QuickTake

Treasury and German bond markets mirrored the move this week, with much of the flattening attributed to technical factors. Yet ramped-up bets for Bank of England tightening mean the gyrations went further in the gilt market, with traders wagering on a series of rate hikes starting in December to take the key rate to 0.75% next year from 0.1% now.

“Global moves have been driven by a combination of macro factors and positioning unwinds,” said Mohit Kumar, a managing director at Jefferies International. “The macro argument could justify the U.K. flattening move, but we do not agree with extrapolating a similar argument to the U.S. or German curve. Recent inflation pressures and supply bottlenecks could indeed lead the BOE to act on rates.”

Investors globally are becoming worried that sustained inflation would force policy makers to accelerate rate hikes, thereby pressuring the economic recovery. Those concerns are particularly pronounced in the U.K., where both fiscal and monetary stimulus look set to be withdrawn in tandem just months after the biggest recession in a century. That could leave the U.K. an outlier on the world stage, with the nation also facing slower growth, widespread labor shortages and a cost-of-living crunch for its poorest citizens.

The spread between two- and 30-year gilt yields has tightened 17 basis points this week, in line with its U.S. equivalent and around double the move seen in Germany.

While bets on policy tightening aren’t unique to the U.K., they are less feverish elsewhere. Money-market traders briefly brought forward expectations for the first Fed rate hike to September next year after the CPI data, before easing back to betting on a November liftoff.

Technical factors may also be at play. Japan’s life insurers are expected to boost buying of U.S. government bonds. There has been a significant demand for gilt duration from life insurance and pension funds, while fast-money accounts looking to play bullish inflation and growth trades have been stopped out of curve steepeners, according to Mizuho strategists led by Peter Chatwell.

“The market is now pricing such an aggressive hiking path from the BOE that it would likely hurt the demand side of the economy,” the strategists said. “If the BOE were to deliver this policy path to combat inflation they could actually reinforce a stagflation outcome.”