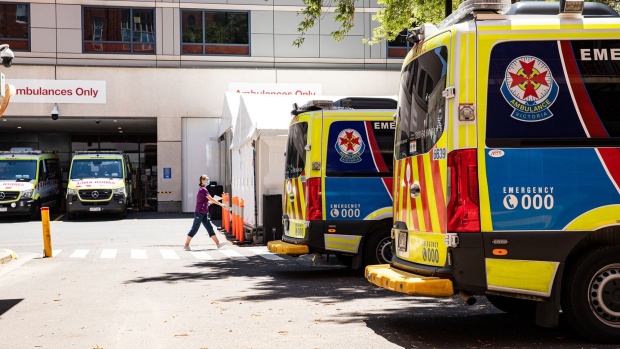 MELBOURNE, AUSTRALIA - JANUARY 11: A general view of the St. Vincent Hospital on January 11, 2022 in Melbourne, Australia. Demand for ambulance services in Victoria and NSW remains high as Australia continues to record new COVID-19 cases across the country, with patients experiencing delays as paramedics struggle to keep up with requests for help. (Photo by Diego Fedele/Getty Images) , Photographer: Diego Fedele/Getty Images AsiaPac

The country is experiencing its worst outbreak since the start of the pandemic with more than 100,000 cases being posted daily, fueled by the now dominant omicron strain. The variant makes up about 90% of cases and two-thirds of ICU admissions in its most populous state, New South Wales.

Australia’s Chief Health Officer Paul Kelly said he expected to see an easing in new cases as soon as late January or early February, adding that infections in NSW may have already topped out.

“That’s what we’ve seen around the world. There’s been a very rapid rise in cases, a peak and then a decrease in some places,” Kelly said Thursday, adding it was difficult to be sure given potentially undiagnosed cases in the community.

His comments were echoed by NSW Health deputy secretary Susan Pearce, who told reporters Friday that case numbers in the state could flatten next week.

“That is pleasing, but that plateauing is obviously still at a relatively high level of Covid patients,” Pearce said.

NSW reported a total of 63,018 new Covid-19 cases on Friday, though 37,938 of those came from home rapid antigen tests, an unspecified number of which had been taken in the previous week and reported later. The addition of the home tests to official case numbers by state governments has distorted the count in recent days.

The omicron variant is leading to fewer hospitalizations than delta, and hospital stays with the strain are shorter, Pearce said. This has meant the state’s hospitalization and ICU admissions are tracking below the best case scenario set in government modeling released last week, she added.

More than 2,500 people have died from Covid-19 in Australia, with 57 new deaths reported on Thursday, according to Covidlive.com.au. |

In Victoria, the second most populous state, the government is more cautious about the outlook, despite new cases remaining stable in recent days. On Friday, the state recorded 34,836 new infections, 15,440 of which were from home rapid antigen tests.

“I don’t have advice yet that we’ve reached the peak of the wave of this omicron variant, and it is something we’re looking at daily, hourly in terms of the impact on our hospital system,”  said the state’s Acting Health Minister James Merlino.

Still, even if cases soon reached their peak, it is likely to be a long plateau rather than a rapid drop in numbers, said Catherine Bennett, chair in epidemiology at Deakin University.

“The footprint of the outbreak is moving,” she said. “So Queensland, then South Australia, Tasmania and the Northern Territory, they’re sitting a bit behind -- so the net effect is this incredible rise and then the growth slowing overall.”

The rising number of infections has led to the reintroduction of some restrictions, including density limits and a ban on dancing or singing, in the heavily affected NSW and Victoria states. There have been shortages of testing equipment across the country and supply chains disrupted after large numbers of infected workers were forced to isolate.

Victoria plans to use two hotels that previously housed quarantining visitors to care for a growing number of Covid patients needing low-level care, to ease pressure on its hospital system. They will be able to house more than 300 patients at a time.

“These growing case numbers in the community are seeing a rise in hospital admissions and emergency department presentations. This is placing enormous pressure on our hard-working doctors and nurses and the entire hospital workforce,” Acting Health Minister Merlino said.

Australia’s National Cabinet agreed on Thursday to remove the requirement for transport and freight workers to isolate after coming into contact with a Covid-19 infection, in an attempt to avoid more empty shelves in supermarkets across the country.