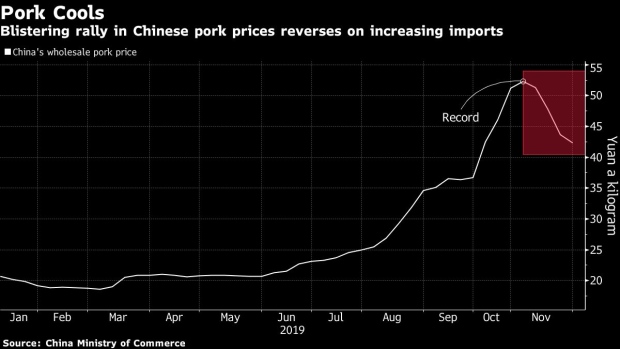 Piglets are kept in pens at a pig farm in Langfang, Hebei province, China, on Monday, April 1, 2019. The higher cost of pork, a key element in China's consumer price basket, will cause the inflation barometer to rise rapidly in coming months, according to economists at Industrial Bank Co., China International Capital Corp., Citic Securities Co., and Nomura International Plc. Photographer: Gilles Sabrie/Bloomberg , Bloomberg

(Bloomberg) -- China’s hog population has stopped shrinking and is starting to rise, after months of decline because of African swine fever, and the recovery should keep pork prices in check, a senior agriculture ministry official said.

Pig herds probably began to pick up in November after 12 provinces, including Henan, Shandong and Jilin, reported an increase in inventories, said Yang Zhenhai, head of the ministry’s animal husbandry bureau. The declines in some provinces in the south and southwest have also eased. “Overall, breeding sow inventories are expanding and we see a bottoming in hog inventories.”

China’s wholesale pork prices have dropped for a fourth straight week from a record level, taking the decline from the start of November to almost 20%. Inflation hit a seven-year high in October on the back on rising pork prices.

A trial program to restrict movement of live hogs to six southern provinces will not push up regional prices, Yang said late Tuesday. China recently allowed movement of live hogs only on specific routes to the six provinces, in an attempt to stop the spread of the hog virus, but the transport of meat was not restricted, and neither was the movement of breeding stock or piglets, he said.

To contact Bloomberg News staff for this story: Niu Shuping in Beijing at nshuping@bloomberg.net