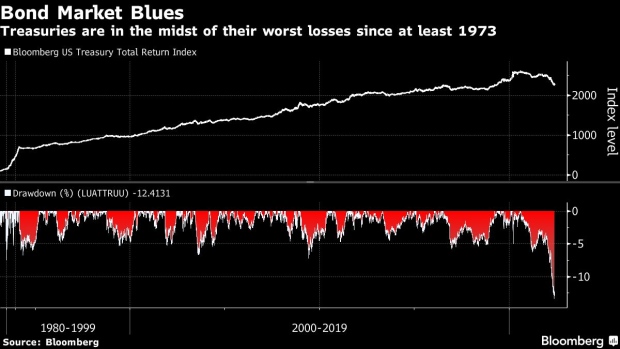 The U.S. Treasury Department in Washington, D.C., U.S., on Thursday, March 31, 2022. The U.S. announced new sanctions on Russia's economy as the Biden administration pledges to keep raising the pressure on Moscow over the war in Ukraine. , Bloomberg

(Bloomberg) -- The worst of the selloff bulldozing the world’s biggest bond market is likely over for now, according to JPMorgan Asset Management.

That’s the view of Seamus Mac Gorain, head of global rates at the $2.5 trillion investment giant, who said markets have now largely priced in expectations for aggressive US interest rate hikes to combat the highest inflation in four decades. Even if yields inch higher from here, the bulk of painful losses has already been inked, he said.

Treasuries can still “get somewhat higher yields, maybe you get to as high as 3.25%,” London-based Mac Gorain said of the 10-year benchmark, which traded around 2.9% Thursday. “But I think the truth is that a lot of the near term move has already happened at this point. We’ve already had a pretty big correction.”

The bond head continues to hold a short Treasuries position “on an outright basis,” he added.

Mac Gorain’s suggestion will be welcomed by investors reeling from the worst drawdown for US bonds since the inception of the Bloomberg Treasury Index in 1973, which has slumped 9% this year. Yields on 10-year Treasuries have climbed more than 200 basis points to their May 9 peak of 3.20%, while those on more interest-rate sensitive two-year notes have jumped more than 250 basis points.

JPMorgan Asset joins a small but growing rank of investors including Morgan Stanley and Pacific Investment Management Co. in predicting the worst of the historic rout is likely over. So far, their bets seem on the money: nominal bond yields from the US to Australia have pulled back from recent peaks as market sentiment shifts from inflation fears to recession.

For Mac Gorain, a former fixed-income portfolio manager at the Bank of England, the odds of a 2022 US downturn are now close to even as Fed Chairman Jerome Powell stresses the central bank will consider “moving more aggressively” to curb inflation.

“Recession next year is a very serious possibility” as the Fed tries to “thread the needle” on balancing inflation and recessionary risks, he said. “You’ll have seen monetary policy tightening starting to impact growth, you’ll have less support from fiscal policy, it’s hard to see any big fiscal stimulus in the US after mid-term elections.”

Mac Gorain is not alone in seeing rising risks of a downturn in the world’s biggest economy. Goldman Sachs Group Inc. sees a 30% to 40% chance of a recession in the next 12 to 24 months. Tesla Inc. chief executive Elon Musk said the US is probably in a recession already -- one that could last up to 18 months.

The JPMorgan fund manager sees the Fed implementing “a series of 50 basis points rate hikes” to tame price growth. That’s in line with market expectations that the Fed is likely to raise borrowing costs by half percentage point for the next three meetings.

“Nothing is impossible in these markets, but I don’t think a 75 basis points hike is the likely option,” he said.

Here are some edited comments from a Q&A:

Hiking Into a Recession

Typically the Fed has stopped its hiking cycle at the point where there’s a possibility of a recession over the next year of somewhere between 30% and 40% -- I think that’s a reasonable baseline for what could happen this time as well.

Stagflation risks are certainly more real in Europe. If you do have a further material restriction in energy supply, especially a shutdown in gas supplies then I think, recession is ‘inevitable’ in Europe. At this point, it’s more of a risk than a base case. It’s very likely now that the ECB will hike in July.

In the end it is likely that the yield-curve control policy will change, now one obvious thing for the Bank of Japan to do will be to shift the target of the 10y point to the 5-year point.