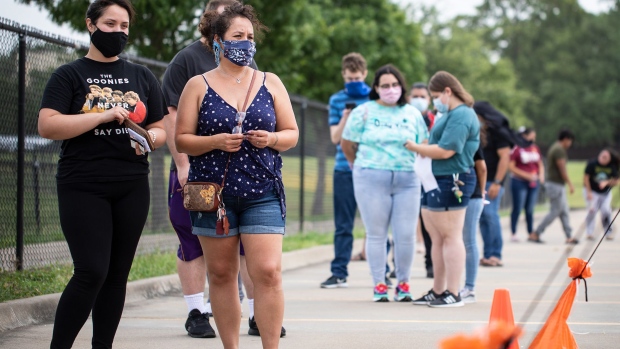 (Bloomberg) -- The World Health Organization warned the worst of the coronavirus pandemic is still to come because of a lack of global solidarity. More U.S. areas took steps to scale back reopenings, with New Jersey halting plans for indoor dining and New York City saying it’s considering the same.

Gilead Sciences Inc. said it will charge the U.S. government and other developed countries $390 per vial for its coronavirus-fighting drug remdesivir, or about $2,340 for a typical five-day course of treatment.

Daily deaths in Iran reached a record and cases in Austria rose to the highest level since mid-May.

Los Angeles County counted its highest daily totals of new cases and people who are hospitalized due to the virus, Public Health Department Director Barbara Ferrer said at a daily briefing Monday. The seven-day average rate of positive tests has jumped to 8.4% from 4.6% in late May, the county said in a release.

The data indicate the virus is increasingly spreading through the community, not just because of increased testing, Ferrer said. Some businesses also aren’t in compliance with public-health rules, she said, urging residents to practice physical distancing and to wear masks.

Last week, one in 400 people in Los Angeles County were unknowingly infected and not isolated. This week that number is now one in 140 people, said Christina Ghaly, director of L.A. County Health Services.

Federal Reserve Chair Jerome Powell stressed the importance of keeping the coronavirus contagion contained as the U.S. economy bounces back from its deepest contraction in decades.

”We have entered an important new phase and have done so sooner than expected,” Powell said in remarks prepared for testimony before the House Financial Services Committee on Tuesday with U.S. Treasury Secretary Steven Mnuchin. “While this bounceback in economic activity is welcome, it also presents new challenges -- notably, the need to keep the virus in check.”

Texas posted a 2.9% increase in new cases, which pushed the cumulative total to 153,011, according to state health department figures. The one-day increase trailed the seven-day average of 4.2% and was the lowest in a week.

In Houston, where emergency rooms and intensive-care units have been strained by the influx of patients, the cohort of Covid-19 patients in ICUs below the age of 40 is about 15%, David Persse, the city’s director of emergency medical services, said during a media briefing on Monday.

Since late May, calls to the city’s 911 system have soared by almost 40%, driven by respiratory-distress cases, Fire Chief Samuel Pena said during the briefing. Emergency rooms are getting backed up trying to admit the influx of patients and that’s delaying how quickly ambulances can return to service and respond to new 911 calls, he said.

MGM Resorts International’s Bellagio and Signature Condominiums, as well as Caesars Entertainment Corp.’s Harrah’s, were sued by Las Vegas labor unions for allegedly failing to do enough to protect workers from Covid-19.

The culinary workers and the bartenders unions filed a complaint Monday in federal court in Las Vegas claiming the hotel and casino operators wouldn’t immediately close and deep-clean areas where infected employees had worked and would require employees to continue working without immediate informing them that a co-worker had tested positive or conducting contact tracing to see if they had been exposed.

“Nothing is more important to us than the safety of everyone inside of our properties,” MGM Resorts said in response to the lawsuit. “We have spent months working with health experts to create a comprehensive health and safety plan. We have offered free testing to all employees before they report to work and require it if they exhibit symptoms or have been exposed to someone who has tested positive.”

Representatives of Caesars didn’t immediately respond to a request for comment on the allegations.

Coronavirus cases in the U.S. rose by 29,182 as compared to the same time Sunday to 2.56 million, according to data collected by Johns Hopkins University and Bloomberg News. The 1.2% increase was below the average daily increase of 1.6% over the past week. Deaths rose 0.2% to 125,928.

AMC Entertainment Holdings Inc., the largest U.S. cinema chain, will start reopening its theaters on July 30, two weeks later than expected, after Hollywood studios rescheduled nearly every movie that was supposed to come out next month.

The chain said Monday it will reopen 450 locations on July 30, and a further 150 the following week. AMC initially planned a July 15 end to its four-month domestic closing, which was so devastating to the company that it warned it might go out of business. The first new big-budget film of the summer, “Tenet” from AT&T Inc.’s Warner Bros., was expected to come out on July 17.

As of Monday, 250 players have reported to training and practice facilities for optional participation in reopening activities, the NHL said in a statement.

The NHL said this month that training camps for 24 teams resuming play will open on July 10.

Governor Phil Murphy said he would pause New Jersey’s plans to restart indoor dining on July 2, citing concerns about such a “sedentary” activity especially among “outlier” bars and restaurants not following social distancing.

This “brings me no joy to do this, but we have no choice,” Murphy said.

New Jersey indoor dining, with capacity caps and other restrictions, had been scheduled to restart on July 2, four days before New York City was to do so. But New York Mayor Bill de Blasio and New York Governor Andrew Cuomo on Monday said skyrocketing cases in the South and West have prompted them to consider postponing dining’s return. Cuomo also cited the failure of some New York City residents to practice social distancing.

Houston-area intensive-care unit wards were 95% full as of Sunday night, up from 93% on Saturday, according to data from the Texas Medical Center. Covid-19 patients occupied 34% of the beds, compared with 31% a day earlier.

The number of Covid-19 patients requiring ICU admission is growing by an average of 3.5% a day, the center said on its website. The hospital systems that inform the medical center’s database have 64 regular ICU beds available and another 877 additional slots that could be made available to handle an overflow.

Miami-Dade -- Florida’s most populous county -- reported 1,149 patients with Covid-19 admitted to hospitals as of Monday, an increase of 67 from a day earlier and the highest level since at least the first week of May.

Some countries are experiencing a resurgence of cases and half the deaths are coming from the Americas, he said.

“This virus can be suppressed and contained using the tools at hand,” and countries shouldn’t wait for a vaccine to deal with it, Tedros said, giving the examples of South Korea, Japan and Germany. “If any country is saying that contact-tracing is difficult, it is a lame excuse.”

The WHO will send a team of researchers to China next week to study the virus’s origins, Tedros said.

European Union governments are poised to extend a travel ban for U.S. residents for at least two weeks, according to a draft of a decision due to be formally adopted on Tuesday.

The wording of the decision, seen by Bloomberg, signals that the ban disrupting both business and leisure travel across the Atlantic won’t be lifted until U.S. authorities control the spread of the coronavirus pandemic.

The Arizona Department of Health Services reported 625 new cases on Monday, a 0.8% increase, bringing the total to 74,533.

While it was the lowest case increase since May 31, the agency said the data didn’t include all new infections because one of its lab partners didn’t submit a report. That may also lead to a larger-than-expected increase on Tuesday, it said.

The state reported no new deaths Monday, keeping the number at 1,588.

Planet Fitness Inc. fell as much as 6.3% following a news report that more than 200 people may have been exposed to the coronavirus at a West Virginia location of the gym chain.

A client at the Planet Fitness gym in Morgantown tested positive for the virus, raising the possibility that patrons were exposed on June 24, said Mary Wade Burnside, a spokeswoman for the Monongalia County Health Department.

New York City’s Broadway will remain closed for at least the rest of this year, according to a report in the New York Times.

Many shows are signaling that they don’t expect a return to the stage until late winter or early spring, the Times reported.

The Broadway League said Monday that theater owners and producers are ready to refund or exchange tickets previously purchased for shows through Jan. 3, the newspaper said.

New York Mayor Bill de Blasio said Monday that officials are reconsidering a plan to allow indoor dining July 6, as other states experience a surge in Covid-19 cases after reopening restaurants and bars.

De Blasio cited surges of the virus in Texas, Florida and California as reasons to consider a slowdown in reopening restaurants, even at 50% capacity. New York Governor Andrew Cuomo expressed similar concerns Monday morning during an interview on NY1.

“Around the country, a number of cities and states have been moving in the wrong direction,” de Blasio said. “We all love indoor dining, but we see problems with indoor dining.”

The mayor said the city and state will make a decision within the next few days, as health officials are “paying attention to this lesson. We’re increasingly concerned.”