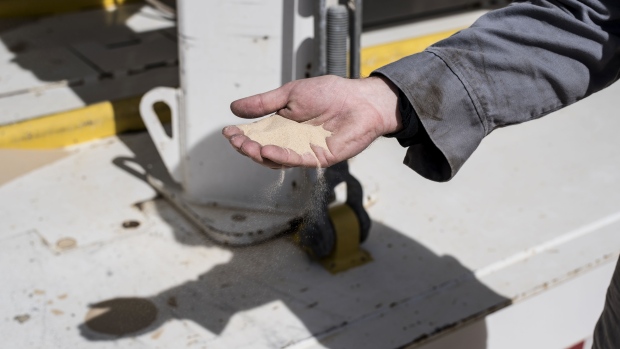 A worker displays a handful of sand used in hydraulic fracking for a photograph at a Royal Dutch Shell Plc site near Mentone, Texas, U.S., on Thursday, March 2, 2017. , Matthew Busch/Bloomberg

Standing high on top of a windswept dune in the West Texas plains, Greg Edwards stares out into a vast ocean of sand. It stretches in every direction, interrupted only by an occasional strip of asphalt or clusters of silos that rise high into the sky.

Edwards runs a frack-sand mine. And those silos mark the presence of his rivals, who suddenly seem to be popping up everywhere. As he turns 360 degrees under the blistering midday sun, he calls out their names one by one: “Badger ... Atlas ... High Roller ... Alpine ... Black Mountain ... Covia.”

Twelve months ago, none of them existed -- not even the mine owned by Edwards’s employer, Hi-Crush Partners. It was the first of its kind here in West Texas. Day one was July 31, 2017. Ten others immediately followed. And another 10 or so are now hustling to get started.

Together, they will mine and ship some 22 million tons of sand this year to shale drillers all around them in the Permian Basin, the hottest oil patch on Earth. It is a staggering sum of sand, equal to almost a quarter of total U.S. supply. And within a couple years, industry experts say, the figure could climb to over 50 million tons.

David Cutbirth, the long-time mayor of the nearby town of Monahans, is dumbfounded by it all. Until the miners arrived, these dunes were a quasi-barren wasteland -- good only for weekend adventurers zipping around on buggies. And the price of sand was, well, zero. Today, it fetches US$80 a ton, making this year’s haul alone worth about US$2 billion.

"I’m in awe every day," Cutbirth says. "This stuff is worth something?"

There is perhaps no industry that better captures the money-multiplying effect of the Permian boom than the out-of-nowhere emergence of West Texas as a rival to the original capital of U.S. frack-sand mining in northwestern Wisconsin. With such explosive growth, of course, comes the risk of over-expansion. The local miners are unmoved by such talk -- Hi-Crush CFO Laura Fulton actually laughed at the notion -- but to the more dispassionate set of analysts and investors who watch the industry from afar, it is a major risk even if the oil market continues to go strong.

“The fear on Wall Street today is, ‘Oh my gosh, things look great today, but we can’t assume this is gonna last,”’ said Joseph Triepke, a former Jefferies Group analyst who now runs an industry research firm called Infill Thinking. “Look at all this capacity.”

This concern is clearly visible in the stock market. Shares of Hi-Crush are down more than 10 per cent since mid-May. So too are those of U.S. Silica Holdings and Emerge Energy Services. And Covia Holdings, a new company formed in a merger of two sand powerhouses, has slumped 27 per cent since it began trading last month.

All of these miners, with the exception of Emerge, now have operations in West Texas. And they all have quarries back in Wisconsin too. That state had quickly emerged as the epicenter of the sand market when fracking took off a decade ago. Large, rugged and round as marbles, the granules found there are ideally shaped to prop open crevices in shale rock so that the oil can seep out freely.

The West Texas sand isn’t nearly as big or as sturdy. And it’s oddly shaped too -- more like a jelly bean than a marble.

So for years, it was ignored. (No one was even interested in it for use in other industries, like cement or microchips.) But then, in the summer of 2014, the price of oil plunged. Suddenly, cost-cutting was all the rage. And there was no cheaper place to pump shale oil than in the Permian.

As drillers piled into the region, they began to wonder if they really needed to have sand shipped some 1,300 miles by rail from Wisconsin when they had this inferior, but serviceable, stuff lying all around them. Shipping costs from Wisconsin come to about US$90 per ton of sand. That’s triple the US$25 or so it costs to truck in the Texas sand.

“The business plan is simple,” says Peter Allen, senior project manager at Black Mountain Sand. “We cut out the cost of railing it here.”

Backed by a private-equity firm named Natural Gas Partners, Black Mountain is the biggest outfit in the area. It runs two mines nestled up against a desolate strip of highway that stretches into unincorporated parts of Texas along the border with New Mexico. They’re called Vest and El Dorado. Both are just months old. And both are already cranking out sand at a pace equal to 5 million tons a year.

It takes an army of trucks to haul that much sand to well sites. And they need to get in and out of the mines efficiently. Allen’s target is eight minutes or less. An automated system that knows which sand to feed each truck speeds the process along. Still, they come in so fast that the line can back up quickly. On a recent afternoon, it was several deep. Sergio Pando, a load-out operator, says that’s nothing. On a really hectic day, it can swell to 100.

Like most everyone else here, Pando was lured to the sand mines by the prospect of big pay. Even unskilled newbies can pull down US$19 an hour, almost triple the state’s US$7.25-per-hour minimum wage. A student at Texas Tech University, Pando took off the spring semester to start working at Black Mountain. Six months into the job, he’s making US$28 an hour.

“You have this flood of people and resources and capital going into this small, condensed area,” says Allen, who himself was recruited away from Rio Tinto’s U.S. mining operation. “It’s like a gold rush.”

This gold rush metaphor comes up again and again in conversations here. Or gold mine. That one is popular too. Fulton, the Hi-Crush CFO, says it’s apt for the situation because, just like the speculators of old, people are trying to snap up land now before the actual mining companies arrive.

“They’re trying to just find something, quickly flip it and make some quick cash,” Fulton says. “They really don’t have the intention of staying and working in the sand industry.”

But as Edwards, the mine manager, stood atop that sand dune later that day and took in the sight of all of those rival silos dotting the horizon, he was struck by something very different. And while he didn’t betray any concern when he said it, there’s a cautionary, almost foreboding, note to the observation: “We knew there were people talking about it. We didn’t know how many would go through with it.”