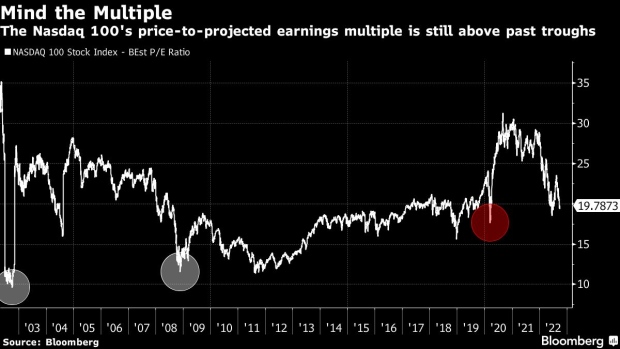 (Bloomberg) -- Technology stocks are tumbling again as the Federal Reserve steps up its fight against inflation and odds of a recession climb. Even with the Nasdaq 100 Stock Index on pace for its longest streak of quarterly declines in 20 years, investors are bracing for more pain.

While bulls were no doubt heartened by Wednesday’s rally, one metric that’s still giving bottom hunters pause is valuation. The tech-heavy benchmark’s 30% plunge this year has removed a lot of froth, yet at 19.8 times projected profits, the index is still trading above past valuation troughs.

In the three recessions over the past two decades, the Nasdaq 100’s multiple bottomed around 13 times earnings estimates, on average, according to data compiled by Bloomberg.

On top of that, most investors expect profit estimates to fall as analysts start to factor in the deteriorating economy, a development that would shrink the denominator in the price-to-earnings equation and make valuations pricier.

“It’s going to become more evident that earnings estimates are going to have to come down,” said Matt Maley, chief market strategist at Miller Tabak & Co. “As those estimates come down, it will show that many of these names are still expensive.”

The tech sector has seen estimates fall more than the average company this year. Estimates for 2023 profit growth for tech companies in the S&P 500 have declined about 6 percentage points since the start of 2022, compared with a drop of 4 percentage points for the broader index, according to data compiled by Bloomberg Intelligence.

With two days left in the quarter, the Nasdaq 100 is down less than 0.1% since June 30, so it’s entirely possible the gauge finishes with a gain. That relatively buoyant performance reflects the summer rally that lifted the market from mid-June through mid-August. Since then, the market has slumped anew, pressured by the hawkish Fed. Now, the outlook for earnings is key to whether prices stabilize.

Should the index decline in the quarter, it would be the third straight quarterly drop, the longest since a similar streak that ended Sept. 30, 2002. The Nasdaq 100 fell 1.8% on Thursday.

Bob Doll, chief investment officer at Crossmark Global Investments, agrees that estimates have further to fall but not as much as some of the more dire predictions are calling for. He expects tech stocks to struggle until inflation cools and the Fed signals it’s nearing the end of its tightening campaign.

“I suspect as we approach third-quarter earnings reports, we’re going to have more disappointments and that the earnings numbers will come down somewhat,” said Doll. “But as long as the consumer is OK, which they are, and corporations are OK, which they are, it’s hard to see big downside.”

Historically, earnings expectations have fallen about 15% to 20% in recessions, according to Mike Mullaney, director of global market research at Boston Partners.

“Everyone’s basically in the recession camp right now,” he said. “The third quarter is going to be a very important earnings quarter. I would expect estimates to come down dramatically.”

The Nasdaq 100 might be down less than 0.1% in the third quarter, but that headline figure doesn’t tell the full story. The tech gauge rose as much as 19.3% in the quarter, only to come crashing back down as inflation surged and the Federal Reserve raised interest rates. While the swing in the first quarter of 2001 was much wider, the three months ending Sept. 30 will see the biggest intra-quarter gain erased.