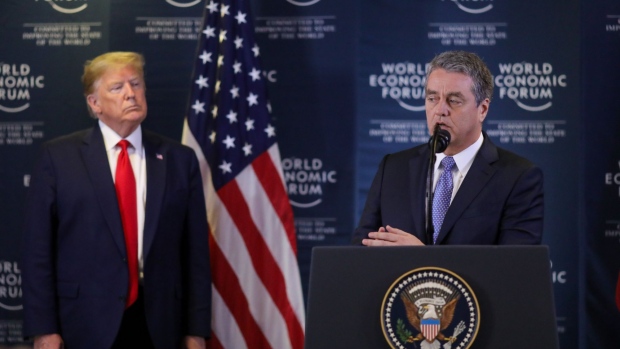 The top official at the World Trade Organization said his decision to step down from his role a year early is the best way to avoid more chaos at the alliance, which has already been hobbled by attacks from President Donald Trump and the start of a global recession.

“I’m just leaving because, frankly, I think it’s the best thing for me, my family and the organization,” WTO Director-General Roberto Azevedo told Bloomberg News in a phone interview Thursday, adding that timing played a factor in his decision.

“We are doing nothing now -- no negotiations, everything is stuck. There’s nothing happening in terms of regular work.”

Azevedo’s exit ahead of his planned departure in September 2021 comes at a delicate moment for the WTO, with global trade expected to recede to historic lows and the economy projected to suffer the worst downturn since the Great Depression.

The Geneva-based body has also seen one of its primary functions, arbitrating trade disputes, curtailed by the U.S. last year.

The 62-year-old Brazilian said it would be better to step down early in order to avoid a situation where the selection process for his successor overshadows the WTO’s next ministerial conference.

Though the WTO has not yet set a date for its next biennial meeting, Azevedo said if it takes place in June 2021, preparations would be “completely destroyed” by the succession process.

He said that would “kill” the meeting, which “is a very critical piece for the reform process of the WTO and the future of the organization.”

And while the WTO’s operations have ground to a halt due to the worldwide pandemic, the organization was already struggling.

The WTO’s dispute-settlement system became dysfunctional last year after the U.S. blocked all nominees to the appellate body and WTO members haven’t concluded a multilateral trade negotiation in half a decade.

Azevedo acknowledged that his abrupt departure could advance the narrative that the WTO is broken and ineffective.

Now is the time for new blood at the helm of the WTO, Azevedo said. “Hopefully, a new director-general will inject precisely that kind of energy and stamina that I think is badly needed.”

“The ship is not going down,” he said. “This ship is sailing fine and what I am doing is giving the command of the ship to somebody else.”

Azevedo declined to say what his next steps would be but made it clear he was not angling for a political career in his home country of Brazil like his wife, Maria Nazareth Farani Azevedo, who is Brazil’s ambassador to the United Nations.