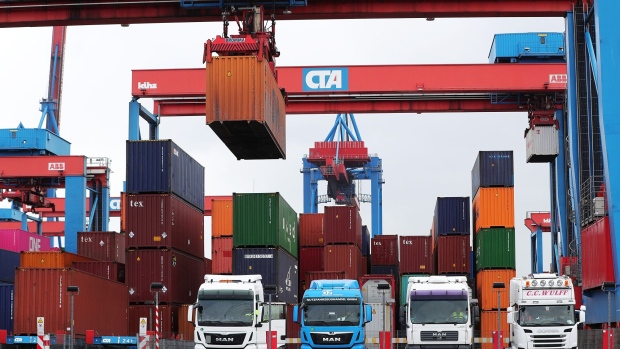 Shipping containers are loaded onto cargo trucks, manufactured by Man SE and Scania AB, right, as Germany's Chancellor Angela Merkel, not pictured, visits the HHLA Container Terminal Altenwerder (CTA) in the port of Hamburg in Hamburg, Germany, on Monday, May 6, 2019. Merkel said Germany needs to stand up for multilateral agreements and strengthening the World Trade Organization in the face of recent “protectionist tendencies.” , Bloomberg

The director of the World Trade Organization’s appellate body division received backing from three WTO officials, who rejected claims from another colleague about his “competence and neutrality.”

In an unprecedented letter sent Tuesday to WTO Director-General Roberto Azevedo and David Walker, chairman of the WTO dispute settlement body, the three members said they “have full confidence in the professional qualities” of Werner Zdouc.

The letter was authored by two of the three remaining active members of the appellate body -- Ujal Singh Bhatia and Hong Zhao -- and by Shree Baboo Chekitan Servansing, a former appellate body member who continues to work on appellate cases even though his term ended in 2018.

In recent weeks the third member of the appellate body, Thomas Graham, has been sharply critical of Zdouc and threatened to step down from his role unless Zdouc was terminated, people familiar with the matter told Bloomberg earlier this week.

Graham had previously complained to Walker that Zdouc had sought to lobby appellate body members, dominate their internal discussions, and steer internal documents and reports toward his own subjective interpretations.

Graham’s colleagues also complained that details of Azevedo’s Nov. 21 meeting with Graham, Bhatia and Zhao had been leaked and misrepresented to the press.

The members expressed their “deep concerns” about the breach of confidentiality and the misrepresentations disseminated about the meeting.

Bloomberg previously reported that on Nov. 21 that Azevedo invited Graham, Bhatia, and Zhao to share their concerns about Zdouc and asked if they would oppose his removal. All three said they would be OK with the move, according to sources familiar with the meeting.

The members said they “disagree completely with these media reports and hope that measures will be taken to refute this misinformation.”

Graham did not immediately respond to a request for comment.

To contact the reporter on this story: Bryce Baschuk in Geneva at bbaschuk2@bloomberg.net

To contact the editors responsible for this story: Brendan Murray at brmurray@bloomberg.net, Zoe Schneeweiss