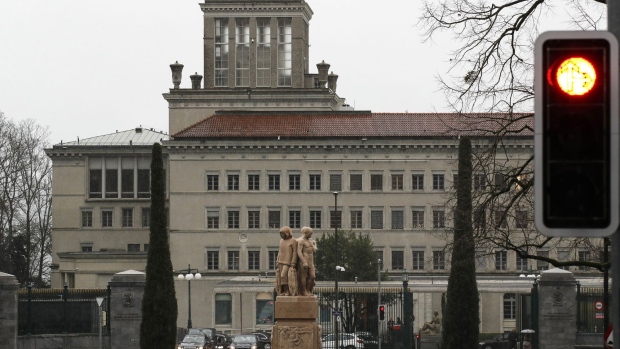 (Bloomberg) -- The World Trade Organization postponed its in-person ministerial conference in Geneva as Switzerland tightened travel restrictions following the discovery of a new strain of the coronavirus, people familiar with the situation said.

WTO members took the decision at an urgent meeting held on Friday night to discuss possible alternative arrangements for their ministerial conference, according to the people, who couldn’t be identified because the talks are private. The conference will be convened as soon as conditions allow, they said.

The Geneva-based body discussed the change “in light of the deterioration of the sanitary conditions and travel restrictions,” according to a notification obtained by Bloomberg News.

The Swiss government announced a ban on all direct flights from southern Africa after the World Health Organization said new, potentially riskier strain named omicron is a variant of concern. Beginning Friday all people entering Switzerland from southern Africa, Hong Kong, Israel and Belgium must present a negative Covid-19 test and go into quarantine for 10 days, according to a statement from the Swiss Federal Office of Public Health.

The sudden change may prevent trade ministers from reaching agreements on critical issues relating to a waiver of the WTO’s intellectual-property rules for vaccines and therapeutics.

Approximately 4,000 trade officials were planning to travel to Geneva for the WTO’s 12th ministerial conference, a gathering of the organization’s highest decision-making body.

The meeting, which was scheduled to take place from Nov. 30 to Dec. 3, presented a rare opportunity for governments to deliver real outcomes that impact the lives of everyday people.

WTO ministerial meetings typically take place every two years but there has not been a ministerial conference since 2017 due to the Covid-19 pandemic.

(Updates with confirmation from first paragraph.)