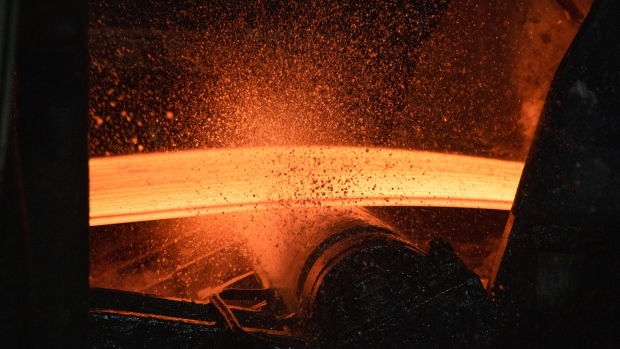 A red hot steel slab passes along a rolling machine in the rolling shop at the Cherepovets Steel Mill, operated by Severstal PJSC, in Cherepovets, Russia, on Friday, Dec. 3, 2021. Even if the recently-identified omicron variant proves less deadly than feared, traders are weighing a weakening growth outlook that could hurt demand for industrial commodities in the months ahead. Photographer: Andrey Rudakov/Bloomberg , Bloomberg

(Bloomberg) -- The US violated international trade rules when it imposed steel and aluminum tariffs under former President Donald Trump, the World Trade Organization said, a decision Washington rejected and stated won’t lead to a removal of the duties.

The 25% tariffs on global steel imports and 10% import taxes on global aluminum, which Trump imposed on national-security grounds, violated basic WTO rules, a dispute-settlement panel said in a series of rulings published Friday.

The WTO panel said US national-security claims “are not justified” because they were not “taken in time of war or other emergency in international relations.”

The US “strongly rejected the flawed interpretation and conclusions” in the report and will not remove its duties as a result of the rulings, Adam Hodge, a spokesman for the US Trade Representative, said in a statement.

The panel of three trade experts sided with China, Norway, Switzerland, and Turkey and encouraged the US to bring its measures in line with its WTO obligations. It was a rebuke of a policy that fell under the banner of Trump’s “America First” political slogan.

The ruling is unlikely to have much impact on American metal producers because the US can effectively veto it by lodging an appeal at any point in the next 60 days. WTO appeals cannot currently be heard, because the US paralyzed the appellate body in 2019.

“The WTO has proven ineffective at stopping severe and persistent non-market excess capacity from the PRC and others that is an existential threat to market-oriented steel and aluminum sectors and a threat to US national security,” Hodge said, referring to the People’s Republic of China.

“The WTO now suggests that the United States too must stand idly by. The United States will not cede decision-making over its essential security to WTO panels,” he said. “We do not intend to remove the Section 232 duties as a result of these disputes.”

In separate statements, United Steelworkers and the American Iron and Steel Institute both said the WTO overstepped its mandate and called on the Biden administration to maintain the tariffs.

The Trump-era tariffs date back to 2018 when China, the European Union, Turkey and a half-dozen nations — Canada, India, Mexico, Norway, Russia, and Switzerland — lodged concurrent disputes at the WTO that argued the measures violated their basic WTO rights. Two related disputes launched by Russia and India remain pending.

The EU and a handful of other nations initially retaliated with tariffs against US exports worth billions of dollars but Brussels Canada and Mexico have since withdrawn their tariffs and suspended their WTO disputes following bilateral negotiations with the US.

The WTO ruling is noteworthy because it dismissed the US argument that the WTO could not mediate trade measures that are necessary to protect America’s sovereign security interests.

The US said its measures were exempt from WTO oversight due to an exception to the WTO rulebook that allows governments to take “any action which it considers necessary for the protection of its essential security interests.”

The WTO has long sought to avoid litigating matters of national security out of respect for countries’ sovereign decisions, and western trade policy has shifted since the case arose.

The US and European Union are said to be considering new tariffs on Chinese steel and aluminum as part of a broader bid to fight carbon emissions. That’s a change from the Trump administration’s reliance on the WTO’s national-security loophole in favor of another WTO exception for trade restrictions imposed in the name of protecting the environment.