The World Trade Organization cut its global trade growth forecast for this year to the weakest level in a decade, warning that further rounds of tariffs in an environment of heightened uncertainty could spark a “destructive cycle of recrimination.”

The volume of merchandise trade will increase by 1.2 per cent this year and 2.7 per cent next year, after a three per cent advance in 2018, the WTO said in a report published Tuesday.

The outlook marks a sharp downgrade from the WTO’s previous projections in April, when the Geneva-based organization predicted a 2.6 per cent gain in global trade in 2019 and three per cent the following year. It also underscores the risks facing international commerce as the U.S. threatens more tariffs on Chinese imports and prepares new, WTO-sanctioned levies on goods from the European Union. 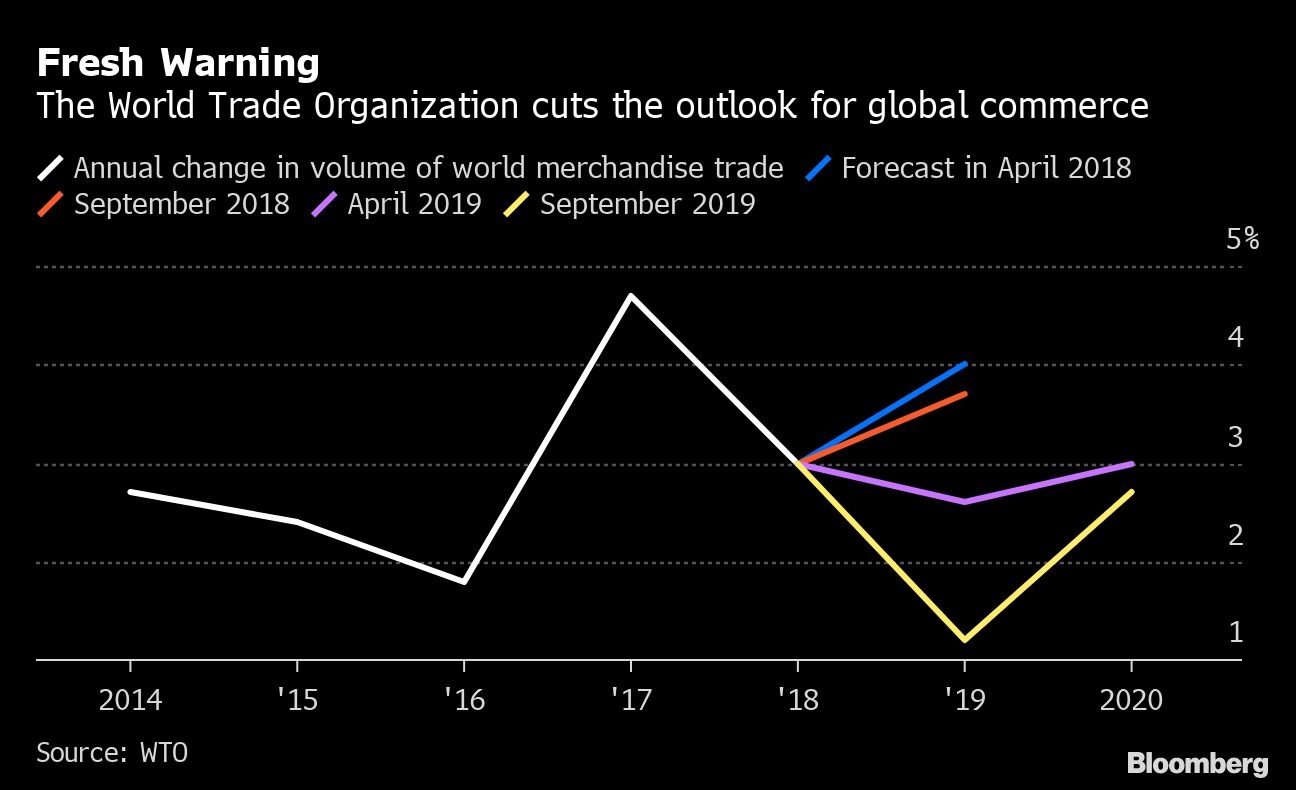 “The darkening outlook for trade is discouraging but not unexpected,” WTO Director-General Roberto Azevedo said in statement. “Trade conflicts heighten uncertainty, which is leading some businesses to delay the productivity-enhancing investments that are essential to raising living standards. Job creation may also be hampered as firms employ fewer workers to produce goods and services for export.”

It’s the third consecutive year the WTO has reduced its expectations for global trade growth and broadly reflects similar readings from the World Bank and the International Monetary Fund. Last month, the Paris-based OECD said the world’s intensifying trade conflicts have caused economic growth to dip to levels not seen since the financial crisis a decade ago.

The WTO’s revised figures represent a key gauge of the stakes involved in President Donald Trump’s effort to overhaul America’s trade relationships around the world.

Since the WTO’s last report, Trump has escalated his fight with China and tit-for-tat tariffs have continued to weigh on global economic growth. Chinese Vice Premier Liu He plans to visit Washington to meet with his U.S. counterparts during the week of Oct. 7. Tariffs on some Chinese imports are set to increase on Oct. 15.

Meanwhile, Trump may soon impose new tariffs on as much as US$8 billion worth of European goods stemming from a 15-year-old dispute over illegal state aid provided to aircraft maker Airbus SE.

The European Commission is mulling a plan to immediately retaliate with tariffs on more than US$4 billion worth of U.S. exports, citing as justification a WTO dispute over prohibited subsidies from two decades ago.

“Risks to the forecast are heavily weighted to the downside and dominated by trade policy,” the WTO report said.