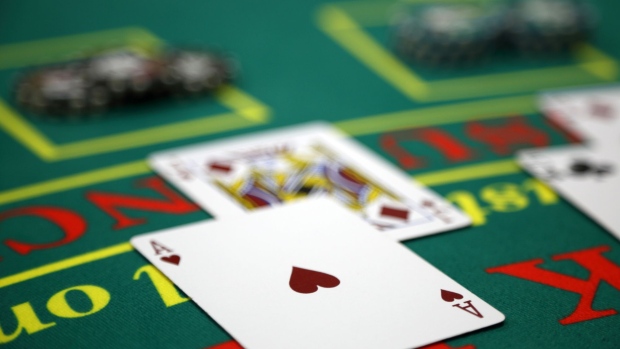 Cards sit on a blackjack table at the Japan Casino School in Tokyo, Japan, on Monday, June 16, 2014. At Japan Casino School, anticipation for the passage of the bill to legalize casinos has helped to enroll about 60 students in April, the second highest since its start in 2004, said principal Masayoshi Oiwane. Photographer: Tomohiro Ohsumi , Bloomberg

(Bloomberg) -- Wynn Resorts Ltd. said it closed its Yokohama office after plans for Japan to award casino licenses were delayed but remains interested in the project.

“The pandemic is having an unprecedented negative impact on integrated resort development, and resort companies such as Wynn are considering how we evolve our operations to align with a post-pandemic market,” the company said in a statement Sunday. “Long term, we remain interested in the Japan integrated resort market and will monitor the situation closely.”

Wynn has been pursuing a casino in Japan for years. The country had been considered one of the biggest prizes in the industry, given Japan’s population and wealth. Japanese legislators approved the country’s first Vegas-style casino developments, known as integrated resorts, but none have yet been built.

A decision to focus on the U.S. market prompted Caesars Entertainment Corp. to end its pursuit of a Japanese casino last year. Las Vegas Sands Corp. said in May that it was also pulling out of the race, citing high tax rates, unfavorable terms and the cost of building there, which many have put at $10 billion.

MGM Resorts International, the lone remaining bidder for a casino in Osaka, said last week that it will continue to pursue the project despite delays in the process that could last until next year.

The coronavirus shut down much of the world’s casinos this year and Wynn’s resorts in Macau, Las Vegas and Boston are still experiencing weak demand. Wynn furloughed a number of employees in Las Vegas last month because business was not coming back as quickly as it had hoped.