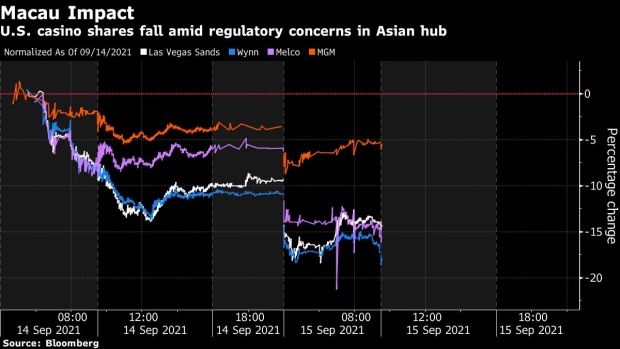 (Bloomberg) -- U.S. casino firms with exposure to Macau tumbled on Wednesday, extending a slump that started in the prior session after officials in the Asian gaming hub said they would tighten restrictions on operators.

Wynn Resorts Ltd. fell as much as 10.5% after an 11% decline on Tuesday. That is the biggest two-day drop for the stock since March 2020. Las Vegas Sands Corp. dropped as much as 6.2%. Melco Resorts & Entertainment Ltd. slumped 11%, while MGM Resorts International fell as much as 3.9%.

“It’s another concerning action of increasing regulation aimed at some of the higher growth parts of the economy,” said Greg Taylor, chief investment officer at Purpose Investments. “It will probably make investors even more hesitant to expand investments in China.”

A Bloomberg Intelligence index tracking big Asia peers fell 23% earlier.  Officials in the enclave -- the only place in China where gambling is legal -- announced that they would begin a 45-day public consultation period to discuss legal revisions.

The latest clampdown is also hurting American depository receipts of Chinese firms. The Nasdaq Golden Dragon China Index fell for a sixth day, dropping as much as 2.1% on Wednesday.

Meanwhile, ADRs for Yum China Holdings, Inc. dropped as much as 6% after the restaurant operator warned that its third-quarter profits could fall by up to 60% as a result of the latest Covid-19 outbreak in China.