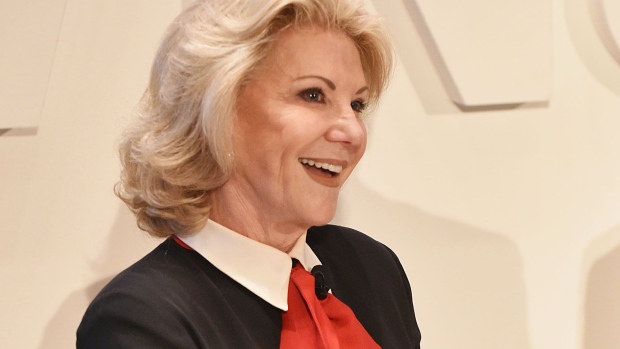 (Bloomberg) -- A new court filing from Wynn Resorts Ltd. suggests that tension between the casino giant and its largest individual shareholder, Elaine Wynn, is still smoldering more than a year after they settled a legal dispute over control of the company.

In testimony Wynn Resorts introduced Friday in an invasion of privacy suit brought by former employee, a witness claimed Elaine Wynn engineered a smear campaign against her ex-husband Steve Wynn, the founder and former chief executive officer of the casino company. He stepped down from Wynn Resorts in early 2018 following allegations of sexual misconduct.

The witness, Renee Palleggi, claimed she was told that Elaine Wynn would pay her a six-figure sum to accuse Steve Wynn of rape. Palleggi also said she heard that Wynn gave the Wall Street Journal a list of 150 women to contact about her ex-husband’s behavior.

The Journal published an expose on Steve Wynn in January 2018 that ultimately led to his ouster from the company.

A spokeswoman for Elaine Wynn said she hadn’t seen the filing and couldn’t comment. Her attorney previously denied to the Journal that she had instigated the story.

By introducing such incendiary allegations in court, Wynn Resorts is likely to further inflame relations with its largest shareholder. Wynn Resorts and Elaine Wynn, who holds an 8% stake in the company, have had a rocky relationship since she lost her seat on the Las Vegas-based company’s board of directors in 2015. Steve Wynn was chairman and CEO at the time, and the pair fought over her right to vote and sell her shares.

In the Friday filing, Wynn Resorts seeks to dismiss a lawsuit brought last month by a former hairdresser at the company. Jorgen Nielsen claims Wynn Resorts spied on him after he was quoted in the Journal article about alleged sexual harassment by Steve Wynn.

Ever since Nielsen left the company, he “has lashed out against those he perceives as opposed to his interests (which he apparently believes are aligned with those of Elaine Wynn),” Wynn Resorts’ attorneys say in the filing. They say Nielsen is a self-described close friend of Elaine’s and thinks she’ll benefit from his efforts.

After Steve Wynn left last year, Elaine Wynn got control of her shares in a settlement. She also successfully pressed the company to install longtime industry executive Phil Satre as chairman. She hasn’t returned to the board, however, and Matt Maddox, a long time protege of Steve Wynn, is CEO.

Nielsen said in his suit that he was the top hairdresser at the Wynn salon in Las Vegas for eight years until he was replaced in 2013 by the stylist for Steve Wynn’s second wife, Andrea.

His suit is one of several filed in the past two months involving Wynn salon employees. Nielsen is seeking more than $50,000 in damages. In its filing Friday, Wynn Resorts said the former employee wasn’t harmed in any way.

As part of the filing, the casino company attached testimony from Palleggi, who identifies herself as friend of Steve Wynn. She made a declaration backing Wynn in a separate defamation case that the former casino mogul brought against Nielsen last year. The case is still pending.

In the testimony, she says Nielsen related that he was with Elaine Wynn at the Kennedy Center Honors in Washington and saw her give two Wall Street Journal reporters a list of 150 women to contact about accusations of misconduct against Steve Wynn.

“Elaine is having the WSJ reporter contact everybody,” Palleggi said, citing Nielsen.

Palleggi said in her declaration she was also urged by Nielsen to claim she had been raped by Steve Wynn, and that Elaine Wynn would be willing to pay her a six-figure amount if she did so.

Palleggi said in the filing that she and members of her family call Wynn “Uncle Steve,” and that she gave her son the middle name Wynn out of fondness for the former casino executive.

The company’s reliance on Palleggi’s testimony suggests that Wynn Resorts is still in “lockstep” with Steve Wynn, notwithstanding assurances to gaming regulators it is completely free of his control, according to Nielsen’s attorney, Kathleen England. The lawyer described Palleggi as a “rich friend” of Steve Wynn.

Wynn Resorts has paid tens of millions of dollars in fines to regulators in Nevada and Massachusetts to settle allegations that it didn’t move fast enough to address employee complaints. The company added female directors to its board and even took the Wynn name off its new resort in Boston.

Maddox, the new CEO, has apologized for the company’s past behavior and vowed to prevent such incidents in the future.