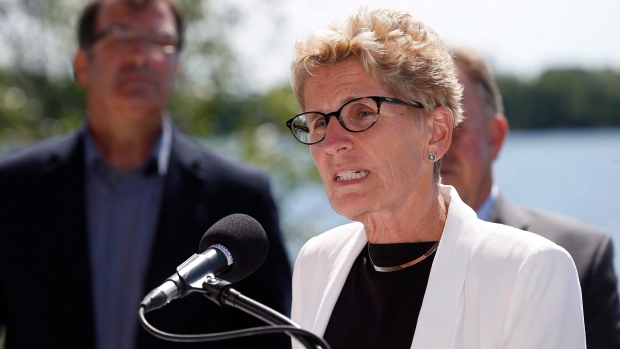 TORONTO - Ontario Premier Kathleen Wynne says she expects any provincial appointee or employee involved with troubled alternative mortgage lender Home Capital to step down if they have a conflict of interest.

Home Capital is a Toronto-based lender under investigation by the Ontario Securities Commission, which alleges that the company, two former CEOs and the current CFO broke the law in their handling of a scandal involving falsified loan applications.

Wynne was asked about Kevin Smith, who is the CEO of St. Joseph's Health System in the Hamilton and the Niagara areas. Smith was also on the board of the Healthcare of Ontario Pension Plan (HOOPP) and chairman of the board of Home Capital, until recently.

On April 27, Home Capital announced HOOPP had agreed to provide the company a $2-billion loan and, at that time, Smith advised HOOPP he was stepping down from its board due to that potential conflict. He has since resigned as chair of Home Capital, but remains on the company's board.

The Progressive Conservatives have questioned whether relationships between the boards of Home Capital, HOOPP, and the provincial government and its agencies are inappropriate.

They've also questioned whether Smith is able to do his job of overseeing a major health-care system in Ontario -- for which he was compensated more than $720,000 last year -- while also being on Home Capital's board.

Wynne says that she can only assume Smith is doing his health-care job.

Wynne was also asked about Alan Hibben, a provincial appointee to the Ontario Public Service Employees' Union Pension Plan Board of Trust, who was appointed to the board of Home Capital on Friday.

She says it's appropriate that he is consulting the province's Conflict of Interest Commissioner about the appointment.