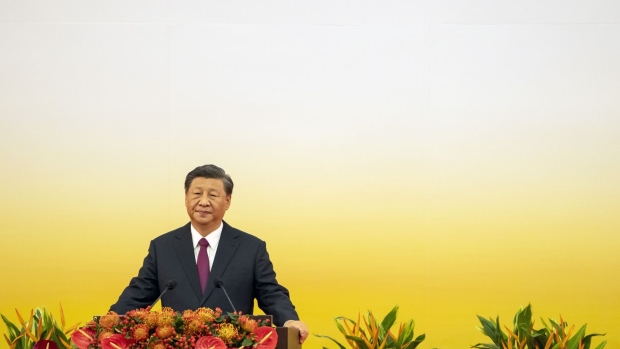 A hiker on a hill looks at residential buildings in Hong Kong, China, on Saturday, June 11, 2022. Hong Kong is preparing to cocoon some 1,000 people involved in the city’s July 1 handover anniversary, fueling speculation that Chinese President Xi Jinping will attend the celebrations. , Bloomberg

(Bloomberg) -- Hong Kong’s pricey housing has long been a gripe for many of the city’s residents. President Xi Jinping has now made addressing that issue a priority for John Lee’s new government.

“What the people of Hong Kong desire the most are a better life, a bigger apartment, more business startup opportunities, better education, and better elderly care,” Xi said in his speech marking the 25th anniversary of Chinese rule. “What the people call for, we must strive to deliver.”

Making homes more affordable for ordinary citizens is at the heart of Beijing’s common prosperity agenda. Sweeping crackdowns in mainland China have already triggered the collapse of some of the nation’s biggest developers and wiped out huge chunks of wealth for their billionaire founders.

Beijing has previously identified housing issues as the root of unrest in Hong Kong. Hong Kong’s government has for decades relied on land auctions to the highest bidders — a tiny number of deep-pocketed tycoons — for the bulk of its revenue. The practice, only amplified under Beijing’s rule since 1997, has limited competition by allowing the same small group to dominate other sectors of the economy such as retail and infrastructure.

Xi called for Hong Kong officials “to change their governance philosophy, better grasp the relations between the government and the market” and “better integrate an active government with an efficient market.” That may presage a shift in policy. New Chief Executive John Lee has already pledged to correct the city’s housing crisis.

Hong Kong’s home prices have jumped 134% starting 1997 and fivefold from a bottom in 2003, according to the Centaline Property Centa-City Monthly Index, outpacing growth in household income. For 12 consecutive years, it has held the position of “least affordable city.”

Hong Kong developers have sought to show their loyalty to Beijing. Many have become more charitable, donating land and resources for transitional housing, echoing the government’s pledge to help young people climb the social ladder.