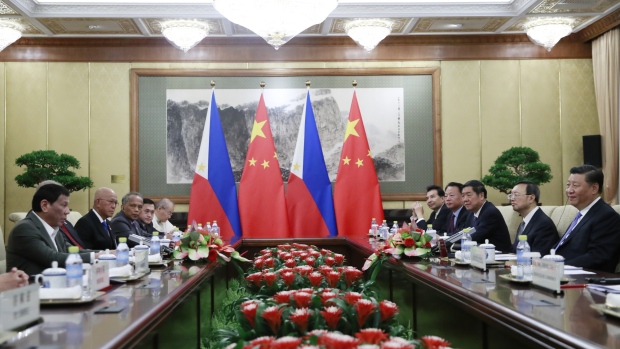 (Bloomberg) -- Philippine President Rodrigo Duterte’s much-touted meeting with Chinese leader Xi Jinping yielded no agreement on the South China Sea territorial dispute between the two nations or a plan to explore the area for oil and gas.

Instead, Xi said China and the Philippines should aim to conclude talks on the Code of Conduct in the South China Sea by 2021, the state-run Xinhua News Agency reported in a Weibo post. This was Duterte’s fifth visit to China in his three years in office, and his eighth meeting with Xi.

Duterte was “steadfast” in his nation’s territorial claims and its victory in the arbitral court three years ago which the Philippine leader described as “final, binding and not subject to appeal,” his spokesman Salvador Panelo said in a statement. Xi stood by China’s position of not recognizing the ruling.

“Both President Duterte and President Xi agreed that while their variant positions will have to remain, their differences however need not derail nor diminish the amity between the two countries,” Panelo said. They agreed “to manage the South China Sea issue, and to continue to dialogue peacefully in resolving the conflict.”

The meeting in Beijing took place amid tensions over China’s increasing presence in South China Sea and Beijing’s crackdown on the Philippines’ billion-peso online casinos catering mostly to Chinese nationals.

A loan agreement for a rail project across the Philippines’ main island and a financing cooperation were among the six deals signed, witnessed by Xi and Duterte. A joint oil and gas exploration was not in the list provided to media.

Weeks before the trip and as the Philippines protested the presence of hundreds of Chinese vessels in one of the disputed Spratly Islands, Duterte said the time had come to bring up his country’s 2016 international tribunal win against China. He had set aside the ruling to warm ties with Xi and tap Chinese funding.

Philippine envoy to China Chito Sta. Romana said hours before the Duterte-Xi meeting that the two nations were seeking to advance plans for joint South China Sea oil and gas exploration during the bilateral.

“We are trying to find a way within certain parameters to move forward,” the ambassador said. “We hope to get it going as fast as possible.”

Duterte was also expected to raise with Xi the presence of Chinese warships and survey vessels in Philippine waters, which has triggered diplomatic protests from Manila over the past weeks. It is not clear if this happened.

“President Duterte and President Xi agreed on the importance of self-restraint and respect for freedom of navigation in - and overflight above - the South China Sea,” Panelo said in his statement. Duterte also raised the possible joint exploration, he said. There was no mention of the presence of Chinese vessels in the spokesman’s statement.

“Xi wants a good media narrative out of his meeting with Duterte,” Ordaniel said. “Certainly, China wants to create a false atmosphere of calm and cooperation in the South China Sea.”

Chinese Foreign Ministry spokesman Geng Shuang said last week that Beijing wants to “expand practical cooperation to ensure steady and sustained progress” in its ties with the Philippines through Xi’s meeting with Duterte.

--With assistance from Cecilia Yap.

To contact the reporter on this story: Andreo Calonzo in Manila at acalonzo1@bloomberg.net

To contact the editors responsible for this story: Cecilia Yap at cyap19@bloomberg.net, Ruth Pollard, Clarissa Batino