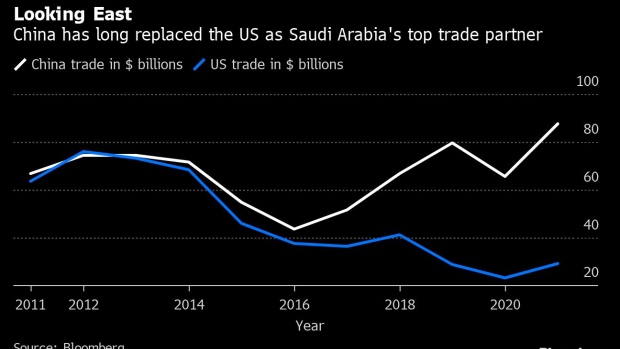 (Bloomberg) -- Two months after snubbing US President Joe Biden’s pleas for oil, Saudi Arabia is rolling out the red carpet for his Chinese counterpart, Xi Jinping.

Xi will visit Saudi Arabia for several days starting Wednesday, during which he will take part in a regional summit with Saudi Crown Prince Mohammed bin Salman and other Arab leaders, the kingdom’s SPA state news agency said, promising agreements worth some $30 billion.  Energy and infrastructure deals will top the agenda, according to two people briefed on the plans.

Xi is due in Riyadh on the same day China signaled a definitive shift away from its strict Covid Zero policy that had triggered recent protests. The summit allows the Chinese leader to look beyond domestic concerns while giving both Xi and Prince Mohammed a chance to showcase the Gulf’s deepening ties with Beijing, underlining just how far US-Saudi relations have sunk.

“This visit is the culmination or crowning of a deep strengthening in relations over the last few years,” said Ali Shihabi, a Saudi commentator and advisory board member for the kingdom’s Neom megaproject. “The US is concerned about this but cannot slow this already strong relationship down.”

EXPLAINER: Understanding the Ups and Downs of US-Saudi Relations

The summit will be “a landmark in the history of Sino-Arab relations,” Chinese Foreign Ministry spokeswoman Mao Ning told a regular briefing in Beijing on Wednesday ahead of Xi’s trip, describing the meeting as a “strategic choice” to strengthen cooperation as the world enters “a new era of turbulence and change.”

US-Saudi ties have certainly run into turbulence lately, with a low point in October when Biden accused Riyadh of allying with Russia on oil production cuts, vowing “consequences.” However, relations have been fraying for some time as the US shifts its global focus to the competition with China.

It’s a decade since the US was Riyadh’s biggest trading partner, and in that time not only has China leapfrogged America, but so too have India and Japan. Total US-Saudi trade shrank from some $76 billion in 2012 to $29 billion last year.

That’s in part because the US shale industry means it no longer imports much Middle East oil; China is Saudi Arabia’s top crude customer now —  and regional oil exporters will be keen for information on China’s plans for lifting Covid restrictions.

Yet Washington has also riled Saudis with its attempts — now all but dead — to return to the nuclear deal with Iran, a regional Saudi rival, while Riyadh’s powerful alliance with Russia and other oil exporters in OPEC+ is another point of friction.

“For the Arab states, it’s about alternatives, in all possible ways”

“It’s high time we stopped seeing this as being purely about economic and commercial relations,” said Cinzia Bianco, a visiting fellow at the European Council on Foreign Relations, who focuses on the Gulf. “For the Arab states, it’s about alternatives, in all possible ways.”

Beijing has been picking up some of that economic and political slack.

In the past six months, Janes IntelTrak Belt & Road Monitor reported a surge of activity across the Middle East by US-blacklisted telecoms firm Huawei Technologies Co.; that State Grid Corporation of China was looking at investment opportunities in regional electricity transmission and distribution; and Saudi Arabia and China agreed to coordinate their investments in Belt and Road Initiative participating nations. The countries will sign pacts for the further “harmonization” of the Belt and Road Initiative with Saudi Arabia’s own Vision 2030 development plan, the SPA agency said.

Talks on a free trade agreement between China and the six-nation Gulf Cooperation Council are entering a “final stage,” China’s ambassador to the United Arab Emirates Zhang Yiming said last month. He even mentioned a memorandum on moon exploration signed with the UAE.

Gulf states view the US as an increasingly unreliable partner and “want to capitalize on a new global multipolar landscape that presents fresh opportunities,” said Elham Fakhro, a research fellow at Exeter University’s Centre for Gulf Studies. In doing so, they might “strengthen their own bargaining power with the United States,” she said.

Still, the US maintains a significant troop presence in Saudi Arabia and across the region, and there are limits to how far Gulf states will look elsewhere.

It’s seen as unlikely, for example, that Saudi Arabia will move forward with the idea of accepting yuan payments instead of the dollar for oil, the two people briefed on the preparations said, referring to reports earlier this year. Diplomats and analysts said at the time the reports should be seen as a political message to the US, rather than the kingdom’s plans.

Whereas Donald Trump chose Riyadh for his first overseas trip as president, Biden came to office pledging that he’d treat the crown price as a pariah for his part in the murder of columnist Jamal Khashoggi.

But faced with high inflation going into the midterm elections, he swallowed his pride and visited the kingdom in July seeking help to lower global oil prices.

He appeared to make some headway, expressing optimism Riyadh would take steps to comply — only for Saudi Arabia and OPEC+ to then announce production cuts. A furious Biden said it was time for the US to rethink the relationship.

Buoyed by higher oil revenues spurred by Russia’s war, the Saudi crown prince has cast the kingdom as a growing power capable of standing up to US pressure.

China has cheered on from the sidelines: Foreign Minister Wang Yi praised the kingdom’s “independent energy policy” and efforts to stabilize the international energy market after meeting with his Saudi counterpart in October. Wang also thanked Riyadh for “long-term and firm support” on matters including Taiwan, Xinjiang, Hong Kong and human rights — all touchstone issues for the US.

“There’s a real synergy to the relationship,” said Jonathan Fulton, a nonresident senior fellow at the Atlantic Council focused on China’s relations with the Gulf.

Whereas “the US keeps talking about a great power game” and focusing on counterterrorism, China has been helping address domestic concerns. The upshot is it’s less about China trying to replace the US than the two countries playing completely different games when it comes to the Middle East, he said.

Saudi Arabia started working with Huawei to develop artificial intelligence systems and the kingdom’s using Chinese expertise to make its own drones. It’s even been reported to be manufacturing ballistic missiles with China’s help, according to a U.S. intelligence assessment.

It’s not all one way, though. High oil prices hurt China as well as the US, and Beijing nurtures close relations with Iran, a key Saudi rival. China cannot just replicate US military support for the region.

The US isn’t asking countries to choose between Washington and Beijing but asking them to be “mindful” of the relationships they’re developing, Derek Chollet, a counselor at the US State Department, told a briefing in Kuwait ahead of Xi’s visit.

“Our assessment is that China, in its efforts to build relations in this region, does not have an interest in building mutually beneficial partnerships,” he said.