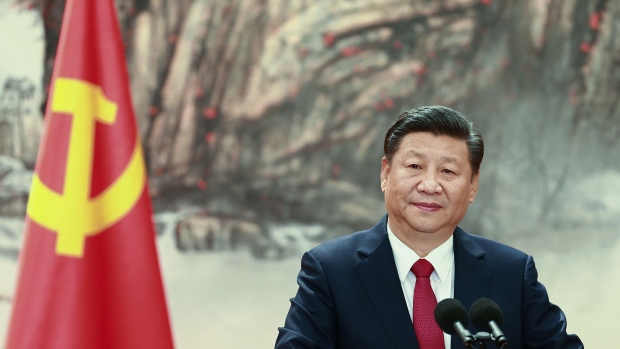 (Bloomberg) -- Chinese President Xi Jinping met in person with International Olympic Committee President Thomas Bach in Beijing, possibly his first face time with a foreign dignitary since the early days of the pandemic.

The last known meeting that Xi had with a foreign leader was in March 2020, when he and Pakistani President Arif Alvi discussed measures to fight the coronavirus in the Chinese capital, according to a report by the official Xinhua news agency. Besides avoiding face-to-face meetings, Xi’s lack of foreign travel -- he hasn’t left the country in just over two years -- raises concern his absence from major events hinders global progress on everything from climate change to disputes with the U.S.

The last time Xi returned from a trip abroad was on Jan. 18, 2020, after visiting neighboring Myanmar. That came five days before his government locked down the city of Wuhan, a move that alerted the world to the severity of the virus that causes Covid-19.

In Tuesday’s meeting, which comes just a week before the start of the Beijing Winter Olympics, Xi and Bach talked about the Olympic Truce resolution adopted by UN member states, as well as Covid measures and the closed loop management system that is being employed for the Games, according to a statement from the IOC.

Xi told Bach that China will fulfill its promise to present a simple, safe and splendid Winter Olympics, and China is “fully” confident it will protect the health and safety of its people and participants in the Games, Chinese state TV reported.