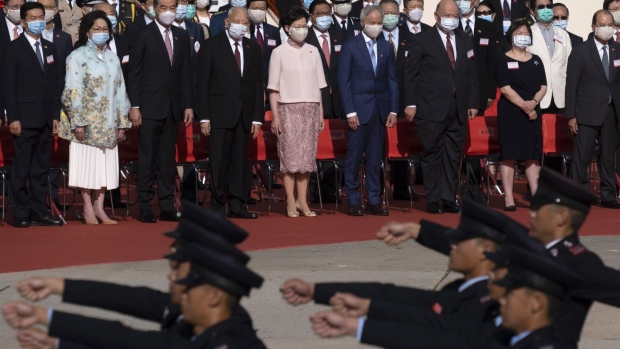 (Bloomberg) -- Minutes after reports broke that China passed a sweeping national security law for Hong Kong, Carrie Lam stood in front of a backdrop of the city’s iconic skyline for a weekly press briefing.

With legions of reporters clamoring to hear details of the law that could reshape the financial hub’s future, it quickly became clear that Hong Kong’s leader had none. Lam, who previously acknowledged that she hadn’t seen the legislation, couldn’t even confirm that China had approved it before quickly ending the press conference and walking away from the podium.

The awkward scene underscored the extent to which Chinese President Xi Jinping sidelined Hong Kong’s leaders in shaping the city’s most important legislation since Beijing took control of the former British colony in 1997. When the details were finally unveiled to the world around 11 p.m. on Tuesday, it became clear why they kept it under wraps.

The law carries life sentences for secession, subversion, terrorism and collusion with foreign forces, which cover everything from serious disruption of transportation networks and attacks on government offices -- tactics used by protesters last year -- to advocating foreign sanctions against China, which many in the pro-democracy camp called for just weeks ago to deter Beijing from passing the law.

It also gives Chinese agents operating in Hong Kong immunity, allows for secret trials and calls for greater oversight of news agencies. And the law is applicable to everyone, anywhere in the world -- whether or not they are Hong Kong residents.

While those provisions look familiar to anyone on the mainland, they are foreign to Hong Kong. The treaty between China and the U.K. that resulted in Hong Kong’s Basic Law guaranteed an independent judiciary, freedom of speech, the right to protest and other civil liberties -- protections credited with attracting foreign talent and investment and preserving its status as one of the world’s top financial centers.

But the law shows that Xi sees Hong Kong foremost as the one place under his control where citizens could openly undermine the Chinese Communist Party’s grip on power, and that could not stand no matter the consequences. Consulting with Hong Kong on a law designed to intimidate its residents into silence, therefore, might make it less effective both as a tool of coercion and as a message to China’s neighbors and the world, according to Rush Doshi, director of the Brookings China Strategy Initiative.

“Beijing is determined to signal strength and resolve even when doing so might harm China’s economic and reputational interests in the U.S., Europe, and now India,” said Doshi, who is also providing informal counsel to the presidential campaign of presumptive Democratic nominee Joe Biden. “This approach, however, clearly reduces the space for bargaining with others.”

The legislation raises concerns about China’s commitment to international agreements like its 1984 Joint Declaration with the U.K. That treaty, which was registered with the United Nations, guaranteed that Hong Kong “will enjoy a high degree of autonomy, except in foreign and defense affairs” and that the “laws currently in force in Hong Kong will remain basically unchanged.”

The Group of Seven foreign ministers said before the law’s passage that the decision was “not in conformity“ with the treaty. China has rejected such criticism as foreign meddling, saying “the core” of its treaty obligations were fulfilled after resuming sovereignty over Hong Kong.

“The bill reflects Xi’s steely determination to draw a bright red line on the inviolability of Chinese sovereignty, and that he views Western governments at best as easily divided and at worst as paper tigers,” said Chris Johnson, a former CIA China analyst who now heads China Strategies Group, a consulting firm. “If Xi is proven right in that judgment, it will increase his dialectical, almost millenarian certainty that the West’s decline is both permanent and accelerating, perhaps emboldening him to take greater risks on other points of tension with the U.S.”

China has no shortage of international spats at the moment. In the past few months it has stepped up fighter jet exercises near Taiwan, clashed over territory in the South China Sea, charged two Canadians it detained under murky circumstances, sparred with Australia over an investigation into the virus origins, quarreled with the European Union over a range of issues and undertook its worst military skirmish with India in nearly half a century.

That’s not even taking into account its wider strategic battle with the U.S., which is preparing to sanction Chinese officials and possibly take stronger actions regarding its moves in Hong Kong after imposing visa bans and restricting exports of sensitive technologies. Secretary of State Michael Pompeo said Thursday the U.S. “will not stand by idly while China swallows Hong Kong into its authoritarian maw.”

Still, the harshest moves President Donald Trump can take -- particularly anything that hits at Hong Kong’s financial stability -- could end up backfiring on the U.S. economy. While Trump has threatened even a complete decoupling of the world’s biggest economies, he also insisted this month that a “phase-one” trade deal the two sides reached in January was “fully intact.”

“China is just slowly tightening the noose under the 1997 handover law, and there’s not much frankly the U.S. can do about it,” said Max Baucus, a former American ambassador to China who also served for more than three decades in the U.S. Senate.

Xi’s move to reign in dissent in Hong Kong gained steam three years ago during a visit to the city. While praising the “one country, two systems” framework, he also hinted at the possibility of the tough measures that came into force this week.

“Any attempt to endanger China’s sovereignty and security, challenge the power of the central government and the authority of the Basic Law of the Hong Kong Special Administrative Region, or use Hong Kong to carry out infiltration and sabotage activities against the mainland is an act that crosses the red line, and is absolutely impermissible,” he said.

That message came just a few years after the 2014 Umbrella Movement protesters occupied a large swathe of the city’s financial district for months. The demonstrations last year, marked by the frequent use of Molotov cocktails, disruption of key transport routes and a brief seizure of the international airport, proved to be the final straw for the Chinese Communist Party.

The tough Hong Kong security law reflects Xi’s “own near-obsession with maintaining stability in all the geographies he considers as belonging to the CCP,” said Jude Blanchette, Freeman Chair in China Studies at the Center for Strategic and International Studies in Washington. “From Taiwan to Hong Kong to India, the Xi administration’s playbook relies on a clenched fist and a checkbook.”

Beijing’s assertiveness in the wake of the pandemic, which has tanked the global economy and increased unemployment at home, has prompted countries to seek ways to reduce their economic dependence on China. The U.S. has called for rewiring supply chains, and both Japan and Taiwan are offering incentives for companies to leave the mainland. The U.K. reversed course on using Huawei Technologies Co. in 5G networks, and India just banned 59 of China’s largest technology apps including TikTok.

Democratic governments are also offering Hongkongers the chance to get out. Japan and Taiwan are both seeking ways to attract financial professionals from the city, while the U.K. has offered a path to citizenship for some 3 millon residents and the U.S. is mulling ways to welcome Hong Kong refugees.

Michael Tien, a pro-Beijing lawmaker in Hong Kong, said multinational companies would be fine if they just focused on business and avoided the four areas specified in the law, including speaking about the Communist Party’s legitimacy in China.

‘Better Than Mobilizing the Army’

While Hong Kong’s concerns about an erosion of freedoms are valid, China’s leaders imposed the law because they felt “cornered” by protesters, according to Zhu Feng, director of the Institute of International Studies at Nanjing University.

“After all, a national security law is much better than mobilizing the army to quash the protests as in 1989,” he said, referring to the military’s deadly crackdown at Tiananmen Square in Beijing. “But that does not necessarily mean that China wants to challenge the global order pinned by the universal values.”

China’s office overseeing Hong Kong affairs called the law the “sword of Damocles” for the “extremely few” people endangering national security, and a “guardian angel” to the “vast majority” of residents. Lam, who finally saw the law’s contents, also praised it Wednesday as restoring stability to the city.

Still, the fact that the city’s leader didn’t comment on the law ahead of time shows how Hong Kong’s autonomy has been “completely thrown out of the window,” said Fernando Cheung, a pro-democracy lawmaker in Hong Kong.

“The U.S. and the rest of the free world have given ample warnings to the CCP not to destroy the international city, and Xi is doing the exact opposite,” he said. “By passing the draconian law in a secretive way, Xi is sending a hostile message to the free world that it has no interests in conforming to the universal values of a free and open society.”