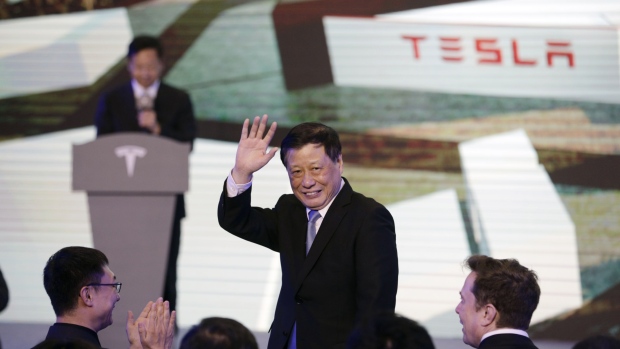 Barely a month ago, then-Shanghai Mayor Ying Yong was sharing a stage with Elon Musk to celebrate the release of Tesla Inc.’s China-built Model 3 sedans -- the sort of glitzy honor that comes with leading the financial hub of the world’s second-largest economy.

Now, he’s stepping into a more difficult arena. Ying, 62, was appointed Thursday to the top political post in central Hubei province, a region simmering with discontent over his predecessor’s failure to contain a coronavirus outbreak that has killed almost 1,400 people across the country.

The choice speaks volumes about what President Xi Jinping values as he grapples with the biggest political crisis of his tenure. Ying, a former top judge who previously served under Xi in positions in Zhejiang province, is seen first and foremost as a proven loyalist.

“By sending a known ally to Hubei, Xi Jinping is also signaling the personal importance he attaches to Hubei’s recovery,” said Ken Jarrett, a former U.S. consul general in Shanghai who’s now a senior adviser for the Albright Stonebridge Group. “This is intended to reassure the citizens of Hubei that the central government will provide all necessary help as Hubei emerges from this public health crisis.”

Ying replaced embattled provincial Communist Party chief Jiang Chaoliang, 62, a former bank executive who saw his political career crumble in just two months as a new strain of virus spread from the provincial capital Wuhan around the world. Hubei -- an industrial powerhouse with an economy the size of Sweden’s -- remains on lockdown, with its healthcare system stretched to the breaking point.

The shakeup indicates increasing unease among China’s top leaders with the political fallout from the virus and their desire to regain control of events. Ying’s success could have particular consequences for Xi, since he’s vested his confidence in the former Shanghai mayor to save the party’s prestige at home and abroad.

“The assignment shows the party with Xi Jinping at its core highly trusts me,” Ying said after he took the post Thursday, with a obligatory nod to Xi’s paramount status in the party. He called the new job “a heavy responsibility” and “a major test.”

Ying’s tenure as a virus-fighter has received mixed reviews, even on China’s heavily censored social media, where some complained about what they said was Shanghai’s slowness in tracking infected cases compared to other regions. One Weibo user named Little Landlady in Shanghai said the city needed to “detail every confirmed case like Tianjin, disclose their tracks like Anhui and manage those returning to Shanghai like Suzhou.”

Carlo Diego D’Andrea, vice president of the European Chamber of Commerce in China and chairman of its Shanghai chapter, praised Ying for introducing measures to support small and medium-sized businesses during the virus outbreak. “Shanghai responded very quickly to alleviate business pressures,” he said.

Ying, who joined the party in 1979, started as an official in the coastal province of Zhejiang, working for the Huangyan county industry bureau and the local police. He then spent much of his career in the province’s party-controlled legal system, rising to become president of the Zhejiang Higher People’s Court in 2006.

There, his career intersected with Xi, who led Zhejiang from 2002 to 2007. Ying later followed Xi to the neighboring metropolis of Shanghai and was appointed to lead the Shanghai Higher People’s Court in 2008.

Because of his overlapping experience with the future president in Zhejiang, Ying is often classified as a member of the “New Zhijiang Army,” a reference to the greater Zhejiang region. It’s a well of connections that Xi has repeatedly tapped since taking power in 2012.

“His appointment reflects the belief that the Hubei party apparatus has performed poorly and needs a good shakeup,” said Trey McArver, a partner at Beijing-based consulting firm Trivium China. “Ying is likely to focus on finding why the system performed poorly, and then taking steps to address the issue.”

In 2017, Ying was appointed mayor of Shanghai, a city of more than 20 million that has long been a key base of political power. While he maintained a relatively low profile, he nevertheless gained experience managing an economy roughly equal in size to Poland’s.

Perhaps more importantly, he expressed vocal support for Xi’s key agenda items, once describing the most important consideration for reforming China’s state-owned enterprises as “maintaining the party’s leadership.” He also presided over “criticism and self-criticism” sessions in the Shanghai government last year, in line with Xi’s Marxist approach to political discipline.

Ying’s most high-profile moment was unquestionably the launch of the Tesla Model 3s last month, when he shook hands with Musk and congratulated him on the brand’s local success. “The cooperation between Tesla and Shanghai is just a beginning and has a promising future,” Ying said.

It was a rare moment in the limelight for a low-key loyal party operative. But as Xi faces down the greatest challenge of his rule in Hubei, he appears to have decided that quiet loyalty was what he needs most.

“Ying Yong’s strongest credential is a long affiliation with Xi,” Jarrett said. “Xi wants someone he trusts as Hubei gets back on its feet again.”

--With assistance from Allen Wan and Charlie Zhu.