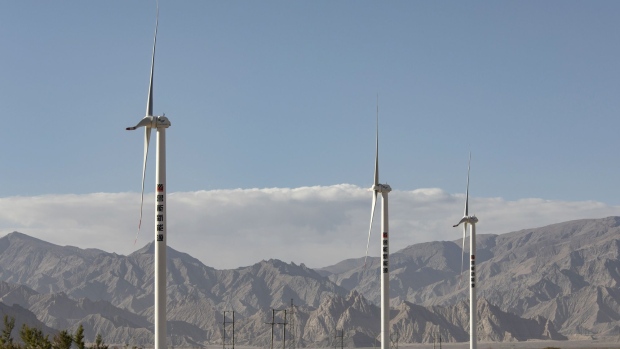 Turbines at a wind farm near Golmud, Qinghai province, China, on Saturday, Sept. 11, 2021. China is opening up its market for trading green energy, making it easier for multinationals from BMW AG to Airbus SE to buy wind and solar power and reach aggressive emissions goals. Photographer: Qilai Shen/Bloomberg , Bloomberg

(Bloomberg) -- The giant wind- and solar-power project in China outlined by President Xi Jinping looks likely to be a network of dozens of modest-sized installations.

China has begun construction on the first phase of a massive new clean energy development in the desert, Xi announced last Wednesday, without offering many specifics. The initial stage will add about 100 gigawatts of capacity -- about equal to all existing wind and solar projects in India.

In recent day, neighboring provinces in western China, Qinghai and Gansu, announced renewables projects with a combined capacity of almost 24 gigawatts that are seen as forming part of Xi’s proposal.

Qinghai will invest more than 65 billion yuan ($10.1 billion) in the next two years to build almost 11 gigawatts of wind and solar projects, according to the head of the province’s energy administration. At least 10 of the projects will be across the province’s desert areas, state media said.

Wind and solar projects with capacity of about 12.9 gigawatts in Gansu began construction last Friday, local media reported. The projects span across at least five cities, according to Gansu Daily.