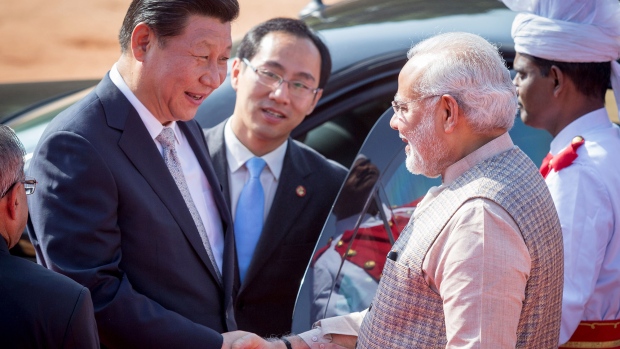 The leaders of the world’s two most populous countries are meeting Friday and Saturday in the southern Indian coastal town of Mamallapuram, on the outskirts of Chennai. This is the second straight “informal” meeting between the leaders, after their interaction in Wuhan in April last year. There’s no set agenda, India’s foreign ministry said in a statement.

The summit comes as China navigates a trade war with the U.S. and months-long protests in Hong Kong, while India is trying to revive an economy that’s seeing the slowest expansion in six years. New Delhi has also expressed annoyance over China’s support of neighbor and rival Pakistan regarding India’s decision to revoke the special autonomous status of Kashmir, a region both Islamabad and New Delhi claim.

The priority of the meeting is likely to be reset ties beyond Kashmir and border tensions, said Jiang Jingkui, director of the Center for South Asian Studies at Peking University. “I expect the two leaders would negotiate in principle to address the difference and make adjustment.”

Trade, especially the Regional Comprehensive Economic Partnership, is also expected to be a focus. China is India’s second largest trading partner with current two-way trade of $87 billion, and the two sides have targeted $100 billion in trade by 2020.

India is under increasing pressure to decide whether it will be a part of the China-backed grouping that seeks to conclude negotiations by November. The RCEP, which aims to create the world’s largest trading bloc, is being seen as a champion of free trade amid a worsening trade war. India’s primary concern is the pact may lead to an influx of cheap Chinese goods, which could further widen New Delhi’s nearly $55 billion trade deficit with Beijing.

The irritants in the India-China relationship aren’t new and experts say it’s unlikely the weekend meeting between Xi and Modi will lead to any major shifts.

“China’s unequivocal support for Pakistan on Kashmir will be one of the challenges towards making this summit productive,” said Harsh Pant, professor of international relations at King’s College London. “But India has to have a relationship with China, it needs to engage with China and bring down temperatures as such. That’s what this meeting may achieve.”

Just days ahead of the weekend summit, Xi hosted Pakistan’s Prime Minister Imran Khan in Beijing and described the relationship with Islamabad as a “unique all-weather strategic partnership.” He vowed to support Islamabad’s “core interests and key concerns” in Kashmir.

India’s foreign ministry responded with a statement reiterating its position that Kashmir is an integral part of India and “it is not for other countries to comment on the internal affairs of India.”

There’s also ongoing tensions between India and China over border issues that date back over five decades, with Beijing laying claim to a large stretch of territory in the Indian state of Arunachal Pradesh -- which New Delhi rejects. The two countries clashed during a brief border conflict in 1962.

The last round of informal talks between Xi and Modi in Wuhan were also held amid border tensions. Then it was over the Doklam plateau, on China’s border with Bhutan and near India’s Sikkim state. Indian and Chinese soldiers were locked in a two-month standoff in the region -- the Wuhan meeting helped soothe some of those tensions.

From India Xi heads on to Nepal for a state visit, a move that New Delhi will be watching closely. China has made considerable inroads in Nepal, traditionally under India’s sphere of influence in the region. China and Nepal are expected to release a new blueprint for Beijing’s Belt and Road Initiative that New Delhi has consistently criticized.

--With assistance from Dandan Li and Lucille Liu.

To contact the editors responsible for this story: Ruth Pollard at rpollard2@bloomberg.net, Muneeza Naqvi