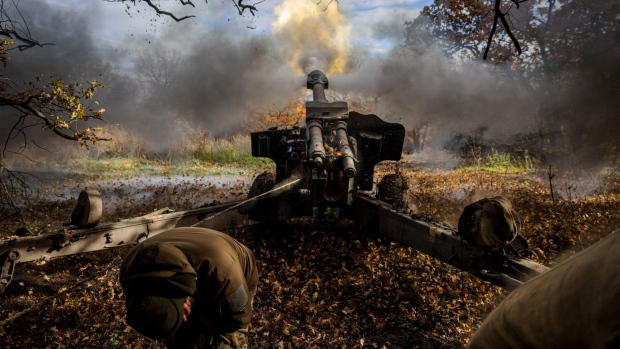 (Bloomberg) -- Chinese President Xi Jinping urged efforts to resolve the war in Ukraine during talks with European Council President Charles Michel, as Beijing sought to address one of its biggest friction points with Brussels.

“Solving the Ukraine crisis through political means is in the best interest of Europe and the common interest of all countries in Eurasia,” Xi said after the meeting on Thursday in Beijing, according to state broadcaster China Central Television. He added that “it is necessary to avoid escalation and expansion of the crisis.”

Michel told Xi that the European Union counted on China “to contribute to ending Russia’s brutal destruction and occupation,” according to a statement from Michel’s spokesman. Both leaders “stressed that nuclear threats are irresponsible and highly dangerous” during their roughly three hours of discussions, it added.

“We all share the responsibility to work for peace and to respect the fundamental principles of the United Nations Charter,” Michel said. “I urged President Xi, as we did at our EU-China summit in April, to use his influence on Russia to respect the UN charter.”

China has refrained from criticizing Russia over the war in Ukraine, blaming the expansion of the North Atlantic Treaty Organization for Moscow’s actions. China signed off on a communique at the Group of 20 summit in Indonesia earlier this month that said “most members strongly condemned the war in Ukraine,” but continues to refrain from calling it a war.

Xi also reinforced his opposition to the use of nuclear weapons in Ukraine during talks with US President Joe Biden at the G-20. Russian President Vladimir Putin had fueled fears he may resort to nuclear weapons, though Russian diplomats later clarified his stance.

The encounter between Xi and Michel came as China’s zero-tolerance approach to the coronavirus faces new stress given the costs to the economy and burdens placed on the public. French companies said last week that the rollout of changes China made to its Covid Zero strategy earlier this month, including pulling back on testing, fell short of expectations. The European nation’s chamber of commerce called on the government to lift “unnecessary and excessive curbs.”

The statement from Michel’s spokesman said he told Xi about “difficulties faced by EU companies and investors, which have been exacerbated by the pandemic.” The statement didn’t mention protests that broke out recently in China against the nation’s strict Covid Zero rules.

At the news conference, Michel said he discussed the protests with Xi as well as the “acceptance by societies of the measures and the reactions by authorities.” He said that both sides had agreed to resume a human rights dialog, adding, “For the EU, the right of assembly is an important fundamental right.”

Also on Thursday, China called for an investment agreement with Europe to be finalized. European lawmakers voted to halt ratification of the Comprehensive Agreement on Investment due to a dispute over human rights issues and both sides levying sanctions.

The deal is “good for China, Europe and the world,” Shu Jueting, spokeswoman of the Ministry of Commerce in Beijing, said at a press briefing. “China and Europe should work together to push for signing and entering the agreement into force so that it can benefit companies and the public on both sides soon.”

Europe has been trying to carve out a middle ground on diplomacy with China, with French President Emmanuel Macron calling for engagement with Beijing and resisting efforts to divide the world into competing blocs.

That move pushes back at the US, which is trying to convince chipmakers around the world to curb high-end exports to China, limiting progress the world’s No. 2 economy can make in areas such as artificial intelligence and military applications.

Still, the US and the European Union aim to work together to counter what they call non-market policies, including in China, according to a draft statement before high-level talks due in Washington this month. Macron, on a state visit to the US, meets with Biden on Thursday.

--With assistance from James Mayger, Natalia Drozdiak and Katharina Rosskopf.