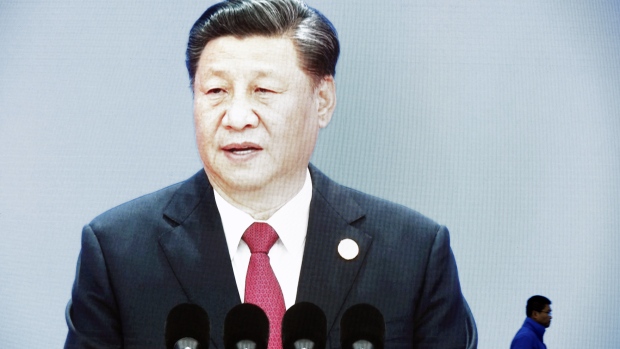 An image of Chinese President Xi Jinping, speaking during the opening of the China International Import Expo, inside the media center at the National Exhibition and Convention Center in Shanghai, China, on Tuesday, Nov. 5, 2019. President Xi said China would focus more on imports and further lower tariffs in his first opportunity to address global investors since the world’s two largest economies resumed trade talks in September. , Qilai Shen/Bloomberg

President Xi Jinping stressed China’s commitment to the global trading order as his trade negotiators wrangle with the U.S. over rolling back punitive tariffs ahead of a phase one deal.

As Xi spoke in Shanghai, the nation’s central bank acted in Beijing to stem a sell-off in the debt market. The People’s Bank of China reduced the cost of 1-year funds to banks for the first time since 2016 after a week in which investors had dumped debt amid fears of tightening liquidity.

At the opening of the second annual China International Import Expo, Xi said the country would “open its doors only wider” to the world. He refrained from taking a swipe at his U.S. counterpart Donald Trump, as he’d done the previous year, and didn’t reference the prospective deal to defuse the tariff war.

“We must all put the common good of humanity first rather than place one’s own interests above the common interests of all,” Xi said.

Chinese and U.S. officials are currently wrangling over the extent to which the Trump administration will roll back previous tariff increases as the price for Xi agreeing to travel to the U.S. to ink a so-called phase one deal, according to people briefed on the discussions.

Amid the trade standoff, China has sought to stabilize the economy without flooding it with liquidity for fear of worsening its debt problems. It has retaliated against Trump’s tariff barrage but been careful not to escalate a conflict that’s sapped confidence and weighed on manufacturers.

“It is obvious that deep conflicts of interest still exist between China and the U.S.,” Li Yang, a member of the government think tank the Chinese Academy of Social Sciences, said in an interview in Shanghai after Xi’s address. “But China and the U.S. have now embarked on a path seeking practical solutions. I feel the likelihood for a major clash or start of a new cold war has disappeared.”

The central bank has been similarly restrained this year, defying many economists’ expectations of major stimulus. Tuesday’s 5 basis-point reduction in the 1-year medium term lending facility was greeted as largely symbolic in economic terms, though it did stop the rot in bonds for now.

The offshore yuan on Tuesday strengthened past 7 per dollar for first time since falling below that key level in August. China’s benchmark 10-year yield dropped the most since August, while the cost on 12-month interest-rate swaps fell the most in a month. 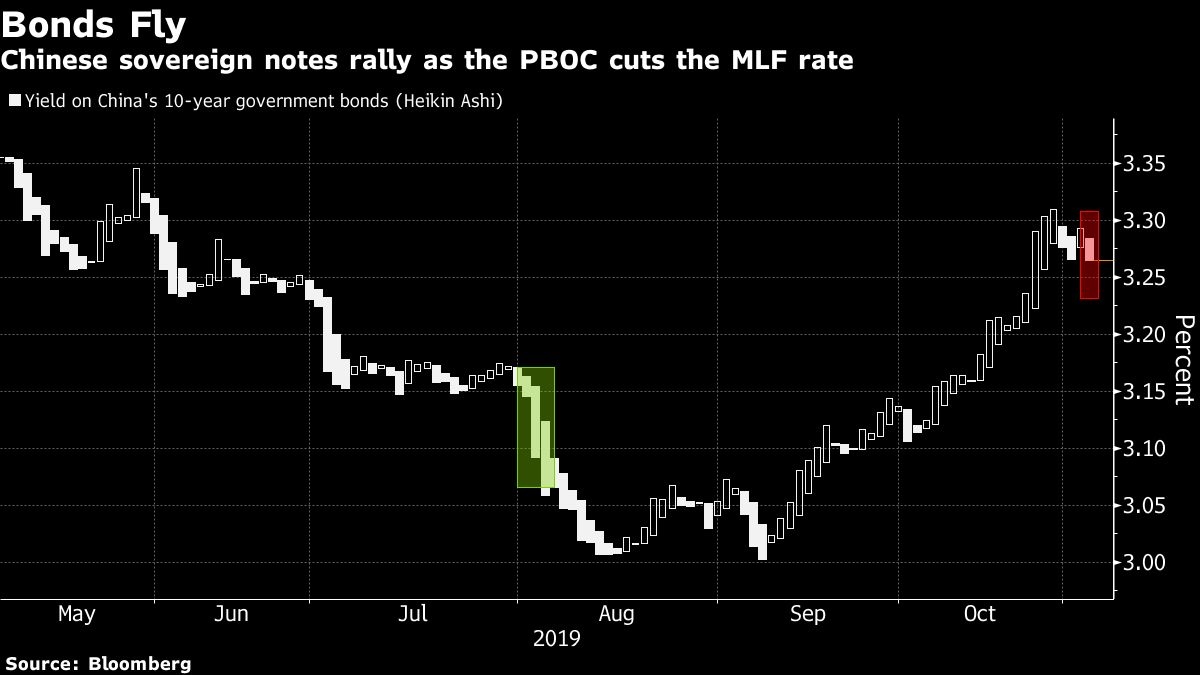 Economic growth has slowed to the weakest pace in almost three decades, with economists forecasting that the expansion will slip further to below six per cent next year. Rather than embark on a short-term stimulus boost though, Xi’s government has instead focused on defusing the nation’s ticking debt bomb and promoting structural changes such as the shift to a more consumption-led economy.

“China will give greater importance to imports,” Xi said Tuesday. “We will continue to lower tariffs and institutional transaction costs,” he added, repeating earlier pledges. China’s imports have contracted this year.

“Xi’s speech endorsed the trade optimism as he indicated that he sees negotiations as the right way to solve disputes,” said Gai Xinzhe, a senior analyst at Sino-Ocean Capital in Beijing. But Xi also warned against “intellectual blockages” and “widening technology gap,“ highlighting China’s worry over the technology decoupling some U.S. politicians are advocating, he said.

Chinese negotiators continue to chip away at the wall of U.S. tariffs imposed on their exports since last year, wary of conceding too much for fear of a political backlash at home.

Negotiators asked the Trump administration to eliminate tariffs on about $110 billion in goods that were imposed in September and lower the 25 per cent tariff rate on about US$250 billion that began in 2018, some of the people familiar with the talks said.

China has also previously demanded that Trump cancel plans to impose duties on roughly US$160 billion in imports, scheduled for Dec. 15, which would hit consumer favorites like smart-phones and laptops. At the very least, those tariffs have to be taken off the table for Xi to get on a plane to meet Trump, people familiar with China’s plans said.

The prospective deal for agreement this month would not address most of the major structural complaints that the U.S. has made, with thornier topics like state industrial subsidies or intellectual property theft left for later rounds, according to U.S. Commerce Secretary Wilbur Ross.

Speaking in Bangkok Tuesday, Ross said he was “hopeful that phase one will be precursor for a much more robust set of agreements.”

“I’m reasonably optimistic we can get something done,” he said.