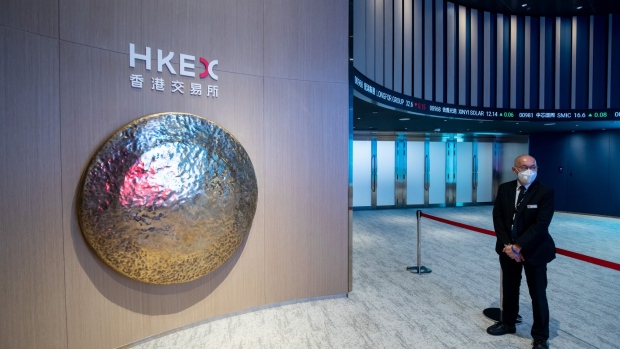 A gong inside the Hong Kong Stock Exchange in Hong Kong, China, on Wednesday, July 13, 2022. Hong Kong is likely to see more dual-traded companies shift toward primary listings in the financial hub as they seek inclusion in trading links with mainland China, according to the exchange's Chief Executive Officer Nicolas Aguzin. Photographer: Paul Yeung/Bloomberg , Bloomberg

(Bloomberg) -- Xiamen International Bank Co., set up almost four decades ago with both local and foreign investors, is considering a Hong Kong initial public offering that could raise about HK$10 billion ($1.3 billion), according to people familiar with the matter.

The Chinese lender is working with advisers for preparation of the share sale, which could take place as soon as next year, said the people, who asked not to be identified as the information is private. The state-backed bank could file a preliminary prospectus as early as the first quarter, one of the people said.

Considerations are at an early stage and details of the offering such as size and timing could still change, the people said. A representative for Xiamen International Bank didn’t immediately respond to requests for comment.

If successful, Xiamen International Bank would be the first bank to list in the Asian financial hub since China’s Dongguan Commercial Rural Bank Co., which raised about $1.2 billion in its September 2021 IPO, according to data compiled by Bloomberg. Hong Kong has only seen a few $1 billion-plus IPOs since then as China’s economic outlook and global recession concerns weigh on the broader equity market.

Founded in 1985 in coastal Fujian province, Xiamen International Bank is China’s first bank that was jointly owned by domestic and overseas shareholders, according to its website. It became a commercial bank wholly owned by local investors in 2013 after restructuring. Its biggest shareholder is Fujian Futou Investment LLC, controlled by the Fujian provincial government.

Xiamen International Bank has more than 40 branches and sub-branches in cities including Beijing, Shanghai, Zhuhai, Xiamen and Fuzhou. It also has fully-owned subsidiaries in Hong Kong and Macau, including Xiamen International Investment Ltd. (Hong Kong) and Luso International Banking Ltd. The lender’s net income was 4.2 billion yuan ($604 million) in 2021, a 5.6% drop from the previous year, according to its annual report. Its full-year net interest income rose 0.9% to 13.9 billion yuan.