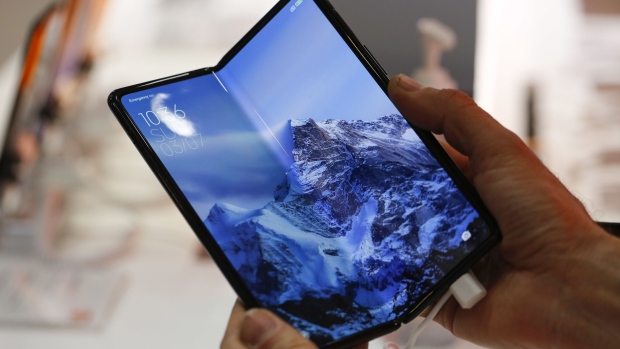 An attendee handles the Xiaomi Mi Mix Fold foldable smartphone at the Xiaomi Corp. stand on the opening day of the MWC Barcelona at the Fira de Barcelona venue in Barcelona, Spain, on Monday, Feb. 28, 2022. Over 1,800 exhibitors and attendees from 183 countries will attend the annual event, which runs from Feb. 28 to March 3. , Bloomberg

The world’s third-largest smartphone maker logged sales of 73.4 billion yuan ($10.9 billion) in January-March, down 4.6% from the previous year, beating the average analysts’ estimate of 72.5 billion yuan. It swung to a net loss of 587.6 million yuan from a 7.8 billion yuan profit a year earlier.

Chinese smartphone vendors are under pressure at home as the country’s Covid lockdown measures hurt both retail demand and supply chains. The biggest chip factories in Shanghai have had to operate under strict restrictions on workers’ movements since late March following a lockdown of the financial hub.

Slumping consumer confidence due to inflation, geopolitical conflicts, and the pandemic affected last quarter’s earnings, Citigroup analyst Andre Lin wrote in a note ahead of the earnings release. The outlook “remains challenged” in light of rate hikes, currency depreciation in emerging markets, rising inflation and recession concerns, he wrote.

The gap between the Beijing-based smartphone maker and frontrunners Samsung Electronics Co. and Apple Inc. widened in the first quarter, following a 17.8% slump in global shipments, according to research firm International Data Corp. Xiaomi’s local rivals Oppo and Vivo however, sustained steeper falls in the same period, data from IDC showed.

“Pressures such as the supply shortage may start to ease in second quarter of 2022,” China International Capital Corp. analysts Hu Peng and Hanjing Wen wrote in a note to investors ahead of the earnings announcement. “The second half of 2022 is likely to be a peak season for the consumption of electronics products, boosting the firm’s results growth.”

Still, Xiaomi faces strong headwinds in its efforts to keep its gross margin at the same level as a year ago, due to rising production and freight costs, Bloomberg Intelligence analysts Steven Tseng and Nathan Naidu wrote ahead of the earnings release. “Internet services, an important driver of long-term margin expansion, could also slow down as flagging handset demand may dampen the growth in monthly average users,” said the note.

The downturn in the smartphone business, which makes up roughly 60% of Xiaomi’s sales, came after billionaire co-founder Lei Jun bet $10 billion to build an electric vehicle business from scratch -- a costly venture that requires talent recruitment, factory construction and investments in startups.

Growing challenges overseas are also a drag on Xiaomi’s business. Russia’s invasion in Ukraine muted retail sales in both countries. In India, the country’s anti-money laundering agency seized $726 million from a local unit of Xiaomi on a possible breach of foreign-exchange laws last month, exposing the Chinese brand to a legal risk in one of its biggest markets. Xiaomi has said its Indian operations are fully compliant with local laws.