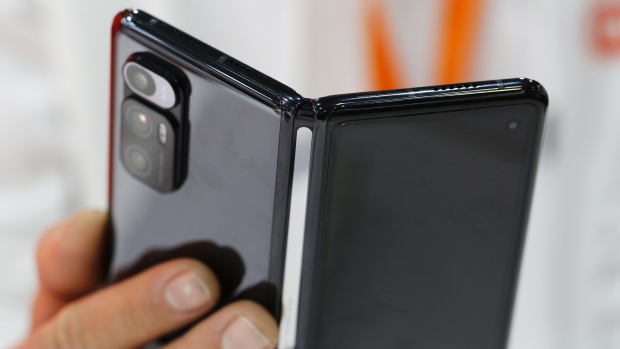 An attendee handles the Xiaomi Mi Mix Fold foldable smartphone at the Xiaomi Corp. stand on the opening day of the MWC Barcelona at the Fira de Barcelona venue in Barcelona, Spain, on Monday, Feb. 28, 2022. Over 1,800 exhibitors and attendees from 183 countries will attend the annual event, which runs from Feb. 28 to March 3. Photographer: Angel Garcia/Bloomberg , Bloomberg

Sales of mobile devices fell 11%, leading declines across business divisions encompassing smart electronics and internet services. The Beijing-based company logged sales of 70.5 billion yuan ($9.9 billion), slightly above estimates. But it posted a surprise net loss of 1.5 billion yuan for the quarter through September, reflecting a writedown of almost 3 billion yuan on items such as investment losses. Adjusted net income, which strips out exceptionals, exceeded analysts’ estimates.

China’s Covid Zero policy has sown chaos across the country’s tech industry and supply chains, depressing economic activity. At the same time, electronics demand is cooling as shoppers react to elevated inflation and slowing economic growth. Global smartphone shipments are at their lowest in years thanks to depressed demand, but Xiaomi managed to gain market share in Europe, executives told reporters on a conference call.

“The challenge in China is Covid, the pandemic situation is still volatile,” President Wang Xiang said. “There’s still room for growth in overseas markets,” he added.

Global smartphone sales are set to decline 2.9% next year following a 12.2% slump in 2022, Jefferies predicted this month. Xiaomi’s unit sales will decrease this year and next before recovering slightly in 2024, Jefferies forecast.

That’s partly because phones sold in recent years have been well-built, leaving consumers with little need to purchase new ones, Jefferies analysts including Edison Lee and Nick Cheng said in the Nov. 9 note. And new models are adding few innovations, they said.

“Structural weakness is worse than expected,” the analysts wrote. The challenges are “compounded by a weak economy.”

China’s smartphone sales downturn could extend to 2023, even though the shipment decrease narrowed in September. A boost from the iPhone 14 launch could be one-time and Android weakness looks to be overwhelming in the following months. Persistent drops in corporate PC shipments indicate business outlook is still cautious post-lockdown.

Xiaomi reported its first sales drop in the first quarter, followed by a 20% decline in sales for the June quarter.

Even the global leaders haven’t been spared. Samsung Electronics Co., the world’s biggest maker of phones, displays and memory, called out falling handset sales in China as a drag on its components business. Apple Inc. expects to produce at least 3 million fewer iPhone 14 handsets than originally anticipated this year, people familiar with its plans have said, primarily due to softer demand for the less expensive versions of the model.

Shares of Xiaomi have lost half their value in the past year, leaving the electronics giant with a market capitalization of about $31 billion. Still, it’s fared better than some of its domestic phone-making rivals, such as Oppo and Vivo, thanks to its wider international footprint and distribution.

Co-founder and Chief Executive Officer Lei Jun has made electric vehicles Xiaomi’s lodestar for future growth, pledging $10 billion in investment and spinning off a separate company for the venture. Xiaomi made progress in the field, Wang said without elaborating.

That project will take years to come to fruition, however, leaving the company reliant on a recovery in consumer spending on electronics to revive its flagging fortunes. Sales of Android handsets, where Xiaomi does battle with Samsung in international markets, are not expected to recover soon, especially not at home in China.

(Updates with executives’ comments from the third paragraph)