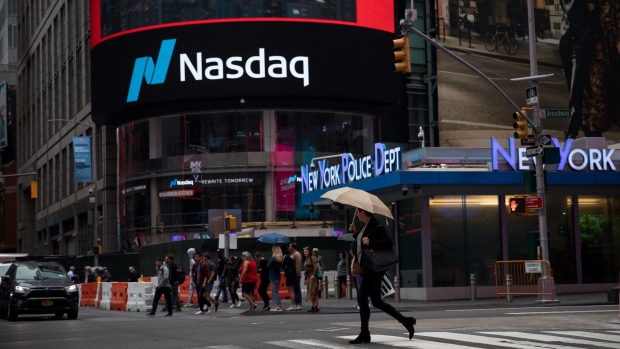 A pedestrian holds an umbrella while crossing the street front of the Nasdaq MarketSite in the Times Square area of New York, U.S., on Friday, Sept. 6, 2019. U.S. stocks advanced and Treasuries were mixed as Federal Reserve Chairman Jerome Powell’s latest comments did little to alter views on Federal Reserve policy. , Bloomberg

XP Inc., Brazil’s largest brokerage by equity-trading volume, is targeting a price of US$22 to US$25 a share for the company’s initial public offering on the Nasdaq exchange, a transaction that could raise as much as US$2.1 billion.

The roadshow for the deal, which is poised to be the biggest IPO for a Brazilian company this year, kicks off Monday, according to a regulatory filing, with pricing expected in the middle of this month.

XP and its owners are selling about 72 million Class A shares, with a possible additional allotment taking the offering to almost 83 million shares. The company itself is selling the bulk of the offering -- 42.5 million shares -- with additional contributions from shareholders General Atlantic and Dynamo VC Administradora de Recursos Ltda.

Managing partners, who own about 30% via XP Controle, also intend to sell, but Itau Unibanco Holding SA won’t divest any of its 49.9 per cent stake, according to the filing, which confirmed an earlier report by Bloomberg. The company plans a dual-class share structure giving the Class B stock held by controlling shareholders 10 times the voting rights of the Class A shares being sold in the offering.

XP, which is based in Sao Paulo and incorporated in the Cayman Islands, declined to comment on the IPO.

The brokerage, which posted a profit of 699 million reais (US$165 million) in the first nine months of 2019, filed on Nov. 15 to be listed on Nasdaq. Goldman Sachs Group Inc., JPMorgan Chase & Co., Morgan Stanley, Itau BBA and XP Investments are the global coordinators for the deal. UBS Group AG, Bank of America Corp., Credit Suisse Group AG and Citigroup Inc. are joint book runners.