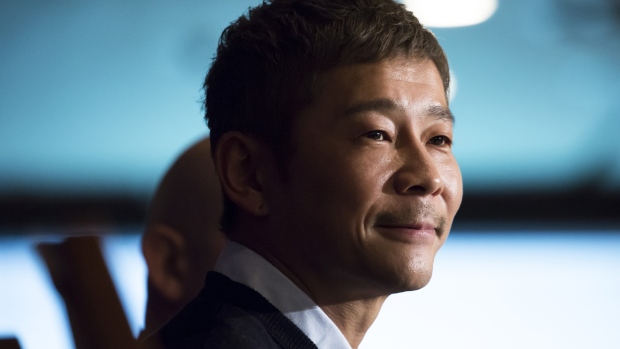 Yahoo Japan is seeking 50.1% of the company in a tender offer with the support of founder Yusaku Maezawa, who will sell some of his own shares, according to a statement. Yahoo Japan offered 2,620 yen per share, a 21% premium to yesterday’s closing price. Maezawa will step down as the chief executive officer of Zozo today, to be replaced by its director Kotaro Sawada.

The deal is likely to bolster the prospects in e-commerce of Yahoo Japan, whose biggest shareholder is Softbank Corp., the domestic telecom operation of Masayoshi Son’s SoftBank Group Corp.’s empire. Zozo, which had a market cap of 675 billion yen ($6.3 billion) before the announcement, has carved out a niche in online fashion against aggressive rivals like Amazon.

Maezawa has been one of the country’s most colorful and flamboyant entrepreneurs. He poured hundreds of millions of dollars into everything from Basquiat paintings to a Hermès-upholstered private jet and he also made a down payment for a ride on Elon Musk’s rocket around the moon. In May, he said on Twitter that he’s selling more of his notable art collection to raise money.

"Yes, I have no money. I spend it so quickly,” he tweeted in May -- with a smiley face -- when asked about his finances. He later said he needs funds to finance more lavish cash giveaways to his Twitter supporters, which have earned him millions of followers.

To contact the editors responsible for this story: Peter Elstrom at pelstrom@bloomberg.net, Kazunori Takada