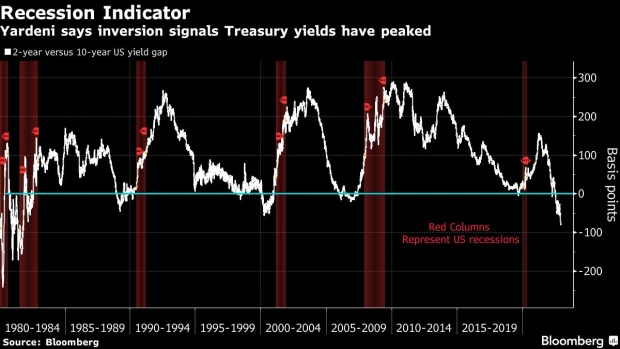 (Bloomberg) -- The inversion of the US Treasury yield curve is flashing that long-term interest rates have peaked, stocks have bottomed out and the Federal Reserve’s policy tightening is approaching its limit, according to Ed Yardeni of Yardeni Research Inc.

With the Fed aggressively boosting rates to tame inflation, short-dated yields have eclipsed those on longer maturities since around mid-year, a phenomenon with a long history of flagging a looming recession. The gap is now as extreme as it was when then-Fed Chair Paul Volcker’s rate-hiking campaign to break inflation tanked the economy in the early 1980s.

The upside-down curve is also a strong signal for other events, including a squeeze in credit, says Yardeni. The veteran strategist is known for coining the term “bond vigilantes” to describe investors who sell bonds to protest monetary or fiscal policies they consider inflationary.

“Yield-curve inversions actually predict that the Fed’s monetary policy is getting too tight, which could trigger a financial crisis that could quickly morph into a credit crunch, causing a recession,” Yardeni, the firm’s president and founder, wrote in a note published Sunday. “The Fed should be done tightening early next year, as anticipated by the inversion of the yield curve since this past summer.”

His view might bring some cheer to holders of both bonds and equities. The Treasury market has lost about 12% this year, on pace for an unprecedented annual decline. Meanwhile, the S&P 500 Index has slumped around 16%, putting it on track for the steepest drop since 2008.

Two-year Treasury yields exceeded 10-year rates by about 81 basis points at one point Monday, a level last seen in 1981. The inversion has deepened as traders ramped up how high they expect the Fed to lift rates. The market now sees it reaching around 5% toward mid-2023, raising the prospect of a slump in economic growth sometime next year.

“Arguably the Fed’s tight monetary policy has already triggered several financial crises,” including the cryptocurrency meltdown, Yardeni said. “Yet, there’s no sign of an economy-wide credit crunch so far.”

The trade-weighted dollar also likely topped out last month, given the approaching end of the Fed’s tightening, Yardeni said.

Fed Chair Jerome Powell is widely expected to use a Wednesday appearance to cement expectations that the central bank will slow its rate increases next month, while also stressing that its fight to tame inflation will extend into 2023.

“We are still expecting a ‘growth recession’ or a ‘mid-cycle slowdown’ rather than the more typical recession predicted by similar yield-curve inversions in the past,” Yardeni said.