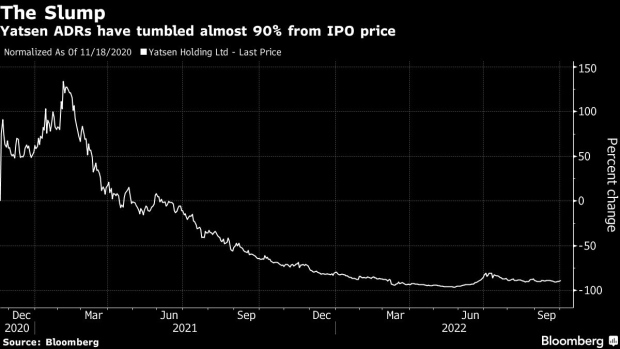 Powder foundations at the Bloomage Biotechnology Corp. research and development laboratory in Shanghai, China, on Friday, April 23, 2021. Bloomage, which has developed special fermenters to bring down the cost of manufacturing hyaluronic acid, or HA, makes hundreds of variations used in skin creams, medications, and more. Photographer: Qilai Shen/Bloomberg , Bloomberg

(Bloomberg) -- Investors in Chinese cosmetics maker Yatsen Holding Ltd. are suing the company and its executives, along with its largest outside shareholder Hillhouse Capital, alleging they allowed misleading information to inflate the price of the shares.

The class-action complaint was filed with a federal court in New York on Sept. 23 by Nancy Maeshiro on behalf of all independent investors who bought Yatsen’s American depositary receipts between Nov. 19, 2020 and March 10, 2022.

The suit highlights an additional source of risk for US-listed Chinese technology and consumer companies, after their share prices slumped on domestic regulatory tightening, geopolitical tensions and an economic slowdown.

A former rising star among China’s technology-enabled consumer companies, Yatsen’s ADRs debuted on Nov. 19, 2020. They more than doubled in value through February 2021, only to tumble later after management revealed a business slowdown. Its US shares closed 88% below the IPO price on Tuesday.

The defendants failed to disclose in its share-sale prospectus any known trends or uncertainties that would have led to business deterioration -- as required by US laws -- making reported financial information a poor indicator of future performance, according to the complaint.

Yatsen was already seeing performance deterioration in its main Perfect Diary and Little Ondine brands in the weeks leading up to the IPO and throughout 2021, the filing added, without saying where it got the information. Yet the defendants only slowly began to reveal it in the second half of 2021 and didn’t disclose both businesses’ results had disappointed until fourth-quarter and full-year 2021 results were released on March 10, 2022.

The defendants “played up the fact that Yatsen had become a leader in the Chinese beauty market,” the lawsuit filing said. Yatsen continued to present the brands as “healthy,” “stellar” and “steady,” it added. Defendants “were aware, but did not disclose, that sales in Yatsen’s core brands were declining and that such deterioration was likely to have a material adverse effect on Yatsen’s future performance.”

In a claim against Yatsen, its executives and Hillhouse, the plaintiff said material misrepresentation and omissions “were done knowingly or recklessly and for the purpose and effect of concealing the company’s results and growth prospects, thereby artificially inflating the price of its securities.”

Hillhouse sold nearly 7.8 million Yatsen depositary receipts during the period covered by the suit, while in possession of material, non-public negative information about the company, the lawsuit said, without elaborating on the specifics of the information. It remains Yatsen’s largest shareholder with a 9.4% stake, according to data compiled by Bloomberg.

The IPO underwriters failed in their duty “to make a reasonable and diligent investigation of the truthfulness and accuracy of the statements contained in the offering documents,” the plaintiff’s filing said.