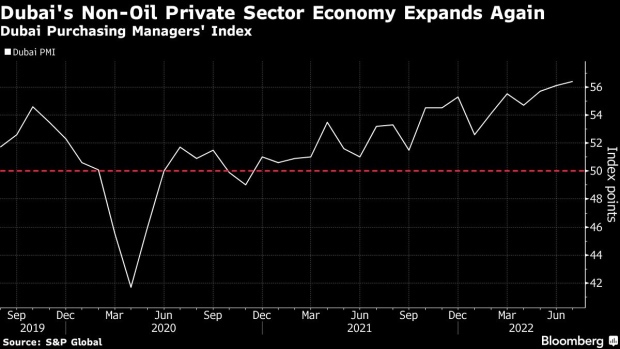 Companies in Dubai ended a 12-month stretch of discounting in July as cost pressures mounted and the local economy powered ahead.

Competition in the emirate has meant that non-energy private firms didn’t always pass on higher costs even as their margins suffered. But while input cost inflation eased in July after four months of gains, businesses “reported a stable trend in prices charged for goods and services,” according to a report from S&P Global on Tuesday.

In a sign of improving business conditions in the non-oil private sector, S&P Purchasing Managers’ Index for Dubai rose to 56.4 last month from 56.1 in June. It’s been above the 50-mark separating growth from contraction since late 2020.

“Input price inflation remained among the fastest on record despite slowing from June’s 53-month high,” David Owen, economist at S&P Global Market Intelligence, said in the report. “There was also evidence of rising pressure on firms’ selling prices.”

While not as intense as in other parts of the world, inflation is percolating in the oil-rich Gulf. The United Arab Emirates, of which Dubai is a part, is among countries in the region that set aside billions of dollars in inflation relief.

Consumer price growth in Dubai, which was negative for nearly three years, approached an annual 6% in June. Firms in travel and tourism last month reported the fastest increase in prices charged since March 2017, according to S&P.

More from the PMI survey: