McCreath: Health of the U.S. consumer does not support a Fed rate cut

As the world sinks into an era of ever-lower interest rates and a chasm of negative-yielding bonds, Japan’s experience offers investors an invaluable precedent.

It’s two decades since the nation pioneered zero rates and more than six years into central bank chief Haruhiko Kuroda’s record stimulus. The money managers who’ve witnessed it all provide unique insights into strategies to survive such a regime.

One legacy of Japan’s ultra-low interest-rate regime is that it has spurred massive investment into overseas assets. But even more telling is the extremes that Japanese investors have gone to in the hunt for yield. They’ve pushed deeper into stocks and real estate, amassed bonds from Europe’s periphery to emerging markets, and loaded up on opaque securities that bundle together hundreds of loans. 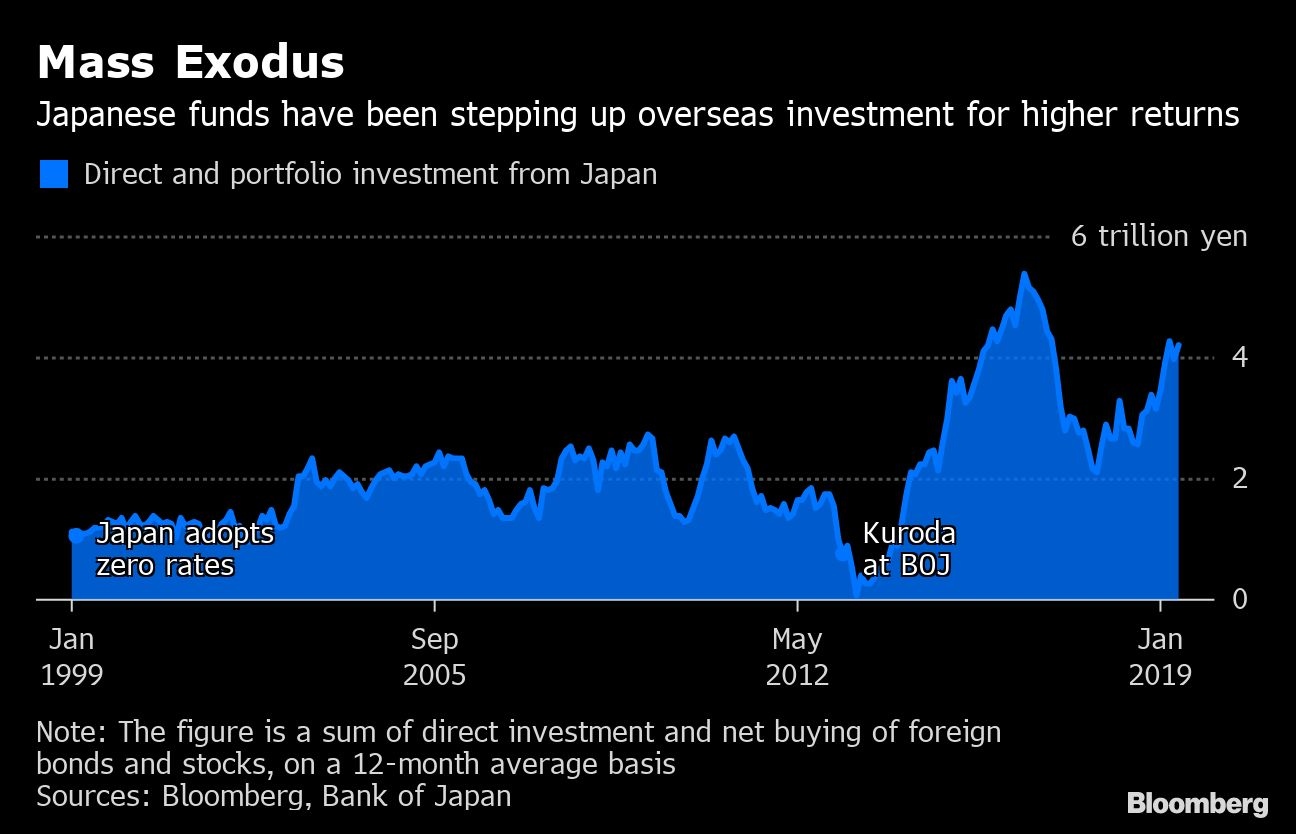 As the quest for returns gets more desperate each year, popular trades become crowded, driving even the most conservative investors into riskier assets. And there’s a greater danger of swings in currencies or monetary policies sparking sudden volatility in prices and money flows.

“These are very difficult times for financial institutions,” said Masato Mishina, the head of Nikko Asset Management Co.’s institutional business division. “High risks will get you high returns but bring the danger of wiping out your capital.”

Japan Post Bank Co. illustrates the scale of the outflows into global markets that ultra-low rates have provoked -- and that asset managers in Europe and the rest of the world may need to emulate. It’s amassed a US$575 billion portfolio of overseas bonds in the space of a decade and now rubs shoulders with names like Pimco, BlackRock and Vanguard. 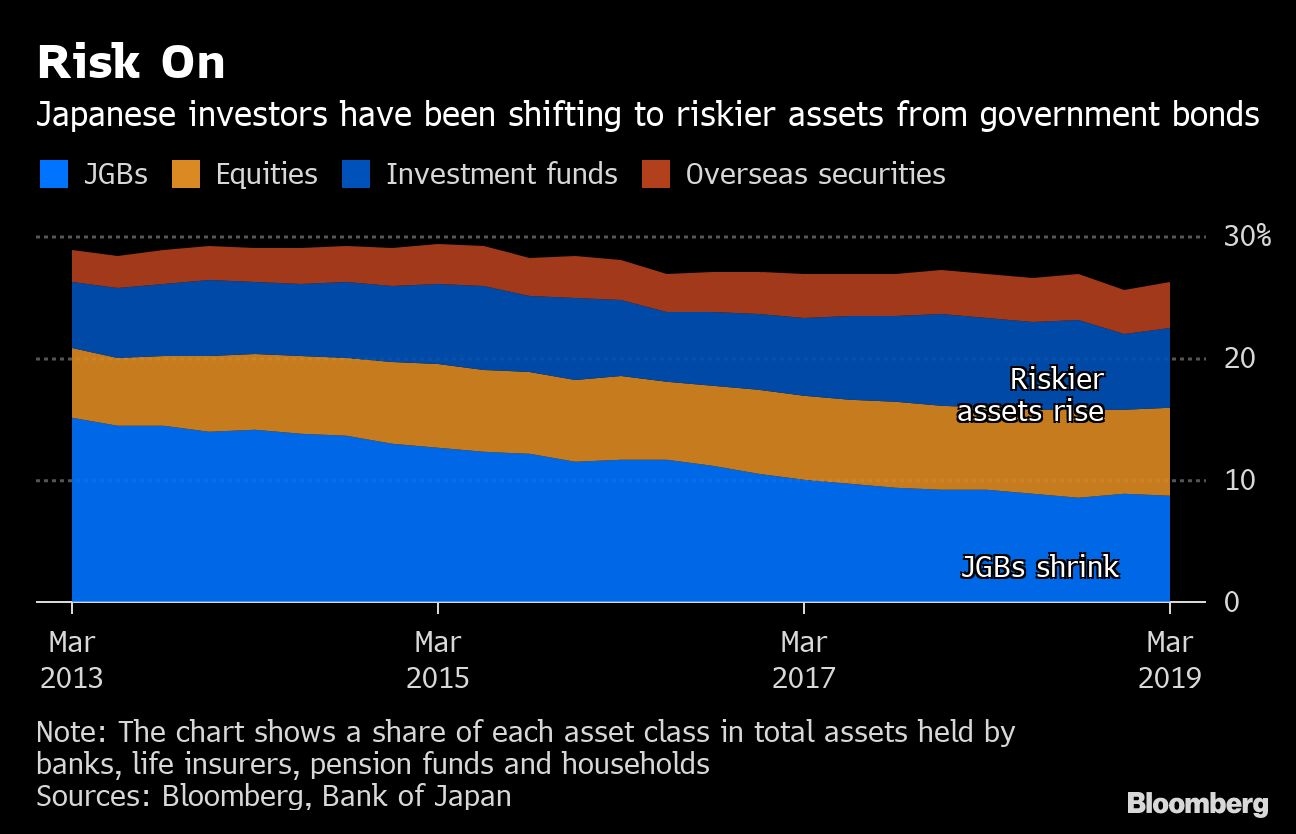 Norinchukin Bank, a cooperative that invests the deposits of millions of Japanese farmers and fishermen, has blazed an even more dramatic trail, soaking up some US$68 billion in collateralized loan obligations from around the world.

He cites a renewed appetite for foreign real estate as one of the more significant developments in recent years. The intensifying search for yield sparked a reassessment of opportunities in property, which had been shunned by many in the aftermath of the collapse of Japan’s economic bubble in the early 1990s, according to Matsunaga.

When it comes to eking out profits from bonds, the country’s life insurers know which way the wind is blowing, at home and abroad.

They piled into French government debt in recent years, but with returns there turning negative, the lifers are shifting focus from the center of the continent to the edges to gobble up the remaining pieces of positive yield. They’re prowling from Italy to Norway and the trend is likely to continue as the European Central Bank resumes adding to its monetary easing.

The nation’s investors as a whole bought a record amount of Spanish debt in May, including corporate bonds. They’re also looking further afield by dabbling in riskier emerging markets, setting a new high the same month for purchases in Indonesia, which issued yen-denominated bonds to take advantage of demand.

Yet the chief of Japan’s largest regional bank has a word of caution on foreign debt. While there are “solid spreads,” dollar-funding costs can turn these negative quickly, said Shizuoka Bank Ltd. President Hisashi Shibata.

Get ahead of the pack

The dilemma for banks and life insurance companies is that most of their liabilities, such as customer deposits and policies, are in yen, making it necessary to protect against sharp swings in foreign exchange markets. When it comes to U.S. Treasuries, which have been a cornerstone of many portfolios, there is little or no return to be had anymore once hedging costs are taken into account.

Shibata is trying to forge a different path by moving aggressively into structured finance, with a view to arranging deals in Japan and eventually abroad.

He’s also led the way among regional lenders in ditching Japanese government bonds, slashing his bank’s holdings by 90 per cent over the past two years.

“It’s not that we wanted to do it. It’s like we’ve been told not to buy,” said Shibata, citing negative yields. “In the end, we can only buy corporate bonds, government-guaranteed bonds and residential mortgage-backed securities.” 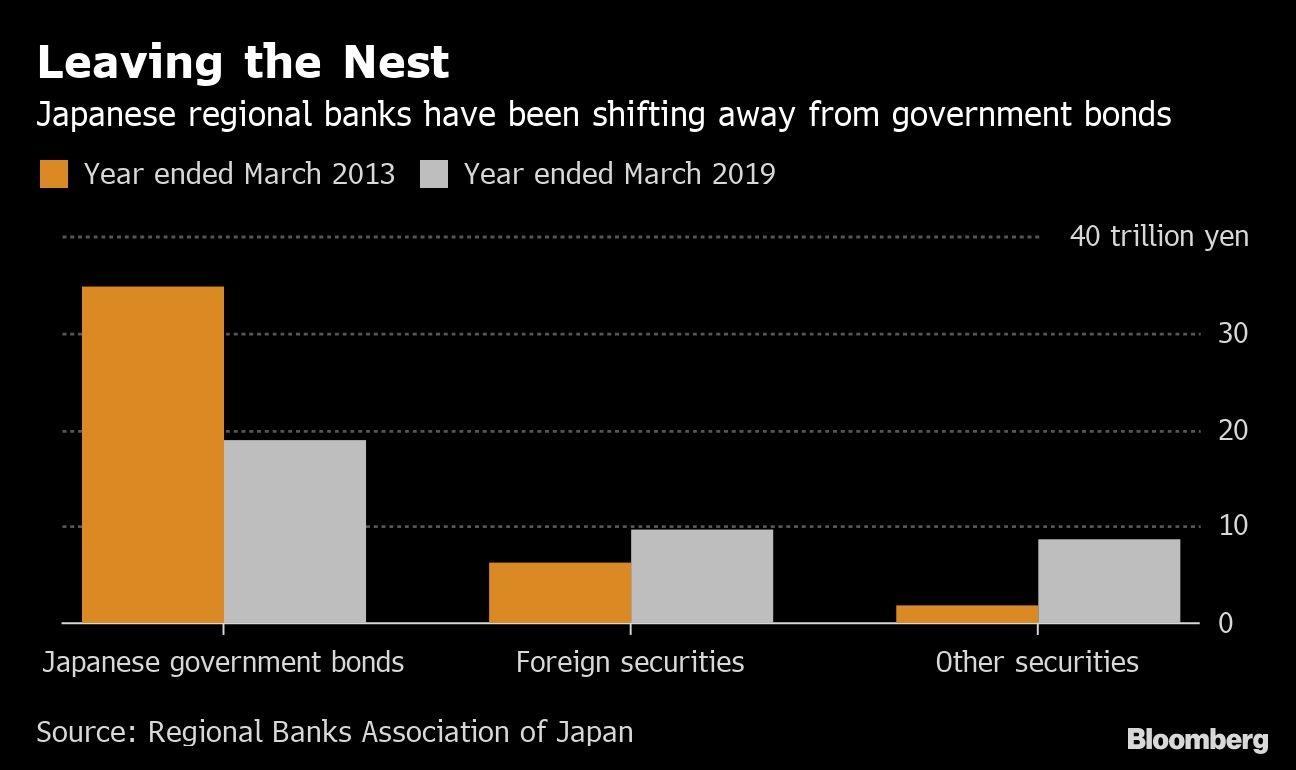 While Shizuoka is booking healthy profits, many of its peers are on shaky ground, thanks to a combination of super-low interest rates, shrinking customer bases and investments in areas beyond their expertise.

The Financial Services Agency identified 30 regional banks and associated holding companies last year that it judged to be taking high risks in securities investments relative to their capabilities.

The Bank of Japan also has a wary eye on the problem. Its own gauge of financial imbalances has climbed to the highest level since the bubble era and complaints from investors and traders over its policy continue to mount. The BOJ concludes a two-day policy meeting on Tuesday, with no end in sight to the program that’s crushing rates. 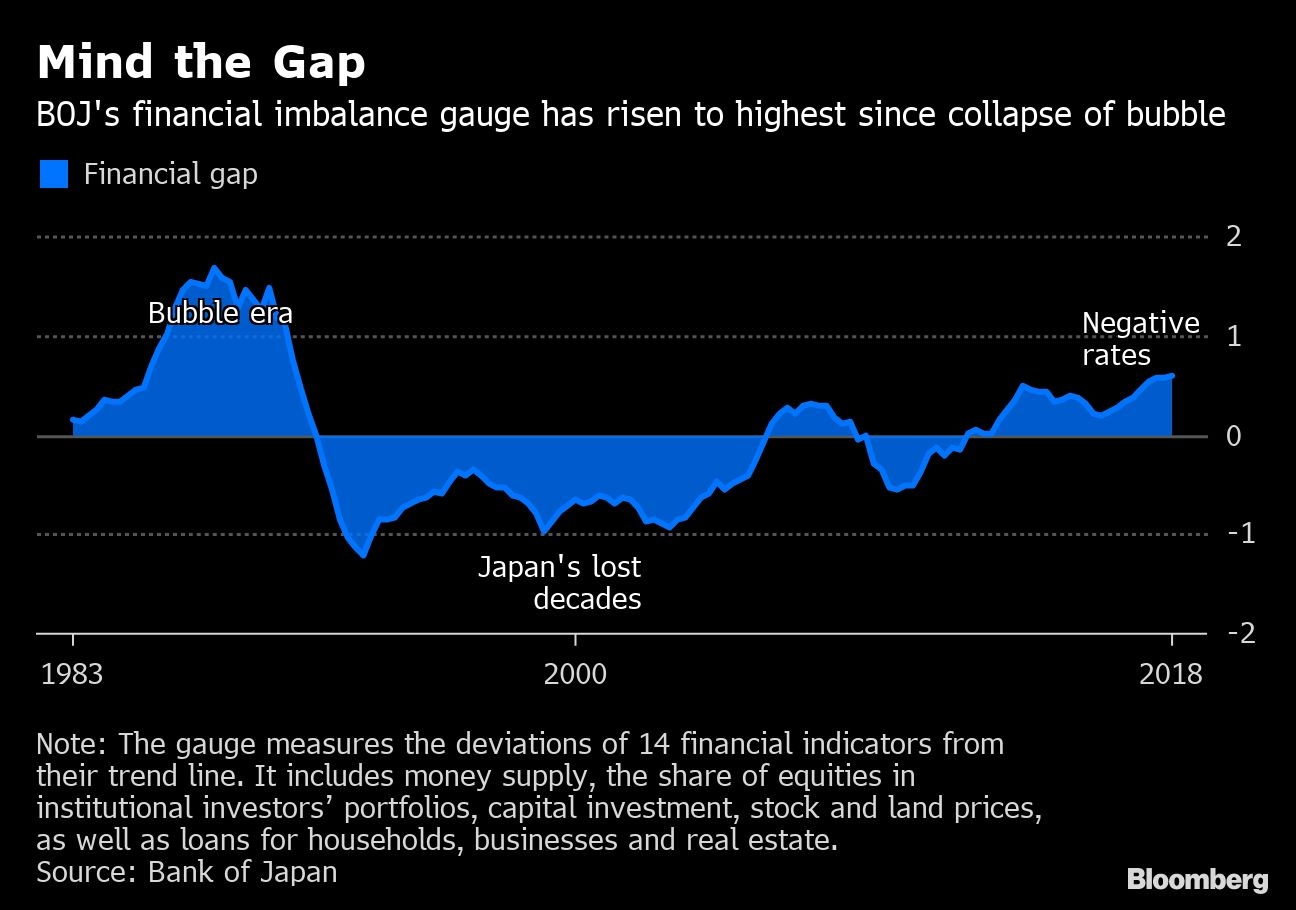 Strike away from the crowds

Another challenge as more Japanese money moves abroad, and as investors in other developed economies face lower yields, is that too many people are crowding into the same places for new opportunities.

“Everybody is hunting for yields and it’s very risky to go into somewhere that’s cramped,” said Hideo Kondo, who oversees 100 billion yen as director of the pension fund for Japanese chemical maker DIC Corp. “Many are flocking aggressively into infrastructure and private markets for things like debt and real estate. We want to avoid making new investments in these places.”

Kondo, who’s been managing the fund for 20 years, said part of the answer is to seek out niche investments. He’s found these in everything from Japanese solar projects to funds that buy up the loans or securities of fintech companies. While the broad brush strokes of his strategy can be copied, most of the assets Kondo snaps up tend to be one-off opportunities.

“What it comes down to, is how do you find the kind of stocks that will deliver returns in an economy that doesn’t grow anymore,” Terao said.

While he declined to give any examples, Allianz funds data compiled by Bloomberg points to some interest in pharmaceutical makers, wholesale and distribution companies, and a smattering of blue chips.

With emerging markets also slowing, going overseas may not be the panacea, according to Terao, who’s been taking a hard look at how to approach equities in the low-yield era.

While Japanese investors were all alone in their zero-rates world two decades ago, this changed during the global financial crisis and today their experiences look even more instructive.

Learn from the masters

Pictet Asset Management Ltd.’s Hiroshi Matsumoto recalls that not so long ago his European colleagues couldn’t understand the huge popularity in Japan of one of Pictet’s equity funds that invested in utility companies around the world.

The returns looked pedestrian relative to European stocks, but Japanese investors saw safety and a steady income stream that was getting harder to find at home.

“They were all asking me, ‘But Why?’,” said Matsumoto, the head of Japan investment at Pictet Asset in Tokyo. “I told them, ‘You wait and see, in five years, you’ll be in the same situation’.”