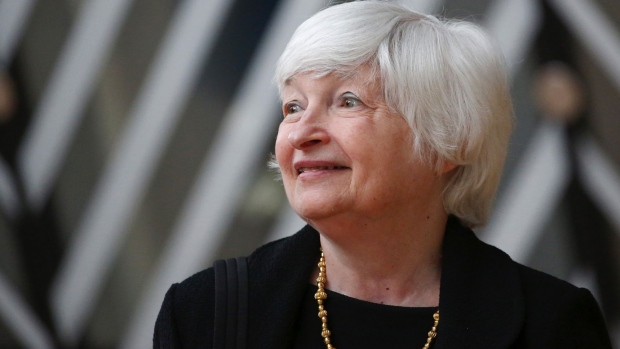 (Bloomberg) -- Treasury Secretary Janet Yellen has one of the biggest to-do lists in Washington: usher in a global tax overhaul, press Wall Street on climate change and distribute billions of dollars in Covid-relief funds.

Yet her efforts are hampered by vacancies in the Treasury’s top ranks, where only three officials including herself have been confirmed by the Senate. Of the 17 key remaining jobs that require confirmation, 10 have nominees stuck in the Senate, while the rest have not been named.

Priorities such as a top-to-bottom review of the agency’s financial sanctions and work to bolster resilience of the U.S. Treasuries market -- which nearly seized up in March 2020 amid a desperate global rush for cash dollars -- have progressed far slower than expected, according to people familiar with the matter.

More prosaically, because President Joe Biden hasn’t yet nominated a treasurer, rules dictate that Yellen’s signature can’t appear on U.S. banknotes. Her predecessor, Steven Mnuchin, unveiled his autograph on the buck within nine months in office.

The staffing shortfall has left Yellen’s team frustrated with over-stretched portfolios, hurting morale as work to develop and enact policies becomes more difficult, according to the people, who asked not to be identified discussing personnel matters.

The vacancies leave the department at risk of losing influence across the administration -- such as in the government-wide review of China policy that’s been underway for months.

“You lose an advocate and a driver of policy when you don’t have senior staff read-in on the large and small details,” said Brian O’Toole, who previously worked in the Treasury’s sanctions unit. While those filling in on an acting or informal capacity may be well-qualified, “their voice in meetings and the inter-agency process where policy making and implementation happens is less powerful because they aren’t a confirmed official,” he said.

Part of the trouble: top Senate Republicans are threatening to hold five Treasury nominations indefinitely, over demands for the White House to undo a deal allowing the completion of the Germany-Russia Nord Stream 2 project.

Lawmakers from both parties have opposed the natural gas pipeline between Russia and the NATO ally, with some arguing it would give Moscow too much leverage over European national security.

Yellen and her deputy, Wally Adeyemo, have held a handful of phone calls with Republicans who’ve objected to Nord Stream 2 decisions, according to one person familiar with the matter. The agency has organized briefing -- some of them classified -- for GOP Senators Ted Cruz and Pat Toomey to share analysis behind the deal, the person said.

Toomey’s spokeswoman, Amanda Thompson, pointed to a statement the senator issued Monday urging Biden to sanction the pipeline in return for lifting a hold on several nominations. A spokesman for Cruz did not respond to a request for comment.

Besides Yellen and Adeyemo, the only other Senate-approved official at the department is Nellie Liang, undersecretary for domestic finance. The other two main units at the Treasury -- sanctions and international affairs -- are currently being overseen by long-time civil servants while Yellen waits for those slots to be filled by confirmed political appointees.

Because of the 50-50 split in the Senate, Republican opposition at the committee level means that a floor vote would be necessary to discharge nominations -- a process that’s been used to advance a small number of other individuals.

The Senate is not fully to blame for the vacancies. The White House has been slow to announce nominees, in part because Biden’s aides must grapple with demands from progressives within the Democratic party, according to people familiar with the matter.

Biden has announced 363 nominations for key jobs across the government, out of about 800 open positions that the Partnership for Public Service is tracking. The Senate has 218 nominees under consideration, and Biden has yet to announce his picks for 223 jobs, according to the nonpartisan Washington-based group.

The Treasury’s sanctions review is being run by Elizabeth Rosenberg, who is Adeyemo’s counselor and awaiting the Senate’s approval to serve as assistant secretary for terrorist financing. Without an undersecretary for the terrorism and financial intelligence unit -- Senate Republicans have placed a hold on Brian Nelson’s confirmation -- that review is not yet complete.

Still, Yellen has achieved several key initiatives for Biden. In July she led the Group of 20 finance ministers in striking a deal on global taxes that had eluded negotiators for nearly a decade. The department has also been handling the disbursement of funds under the giant $1.9 trillion pandemic-relief bill enacted in March.

One area where Yellen’s department has a smaller footprint than expected is in U.S.-China relations. The Treasury suffered a setback in July when Heidi Crebo-Rediker, who had been interviewed and vetted to lead the international affairs unit as undersecretary, was told by the White House personnel office that she would not be nominated, for undisclosed reasons.

For more than a decade, the Treasury secretary has taken the lead in U.S.-China talks -- trying to push Beijing toward free-market reforms, but with less of the aggressiveness sometimes seen in the likes of the Trade Representative’s office, Commerce Department or parts of the White House complex. Without an undersecretary, the Treasury voice is diminished.

Yellen is relying heavily on a group of counselors, political appointees who don’t require Senate confirmation. Among those are David Lipton, the former No. 2 at the International Monetary Fund, is at the international affairs office, bringing his expertise and pre-existing relationships in managing relations with Chinese economic officials; Jacob Leibenluft runs economic-recovery efforts; while John Morton is the department’s first counselor focused on climate issues.

Yellen’s job isn’t about to get any easier. While she won support for the global tax deal, she needs Congress to ratify the accord to keep up her end of the bargain. The Treasury is also facing a potential payments default next month if lawmakers don’t approve an increase or suspension of the federal debt limit.

And Biden’s withdrawal from Afghanistan brings sanctions against the Taliban to the fore. Yellen will need to direct her sanctions unit to smooth the path for humanitarian aid to reach Kabul, and continue the agency’s two decades of work to disrupt cash flow to terrorist organizations.