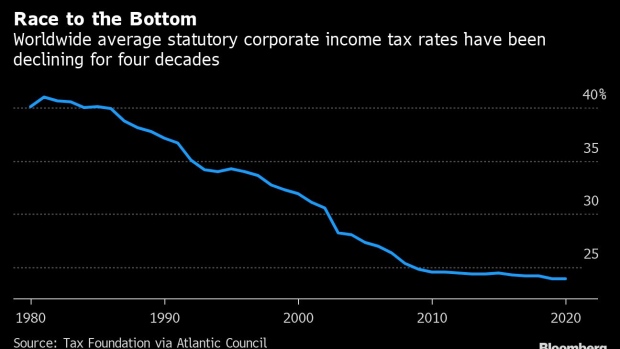 (Bloomberg) -- Treasury Secretary Janet Yellen will have to manage two separate sets of delicate negotiations this fall around a global corporate-tax accord, each with clashing deadlines that could threaten the ultimate success of the deal.

Group of 20 nations plan to finalize the details of a landmark global minimum tax and a rewrite of international tax rules at a summit in late October. That’s also right when congressional Democrats hope to be nearing passage of a $3.5 trillion bill that’s the party’s one shot to make much of President Joe Biden’s economic agenda a reality. Any change in the parameters in one negotiation risks jeopardizing the other deal.

U.S. lawmakers are wary of passing any legislation until they have strong assurances from the more than 130 countries that have agreed in principle to the deal that they will also change their laws. Moving too quickly could put the U.S. at a disadvantage, top Democrats, including House Ways and Means Committee Chairman Richard Neal, have said.

But if Democrats don’t raise the U.S. global minimum tax rate as part of the larger bill -- even if there’s still uncertainty about the final G-20 deal at the time -- they may not have another opportunity to do so for years, should Republicans retake control of all or part of Congress in the 2022 midterm elections.

“You’ve got a lot of the countries around the world watching very carefully what the administration is going to be able to achieve with Congress on some of the promises that are important to the global deal,” said Manal Corwin, KPMG’s principal-in-charge of Washington National Tax.

If Yellen is successful at pushing this change through, she could claim credit for one of the most transformational overhauls to the U.S. and global tax system: a minimum tax rate that will help stop corporate tax avoidance and reduce the power of tax havens as part of a broader overhaul of the rules governing corporate taxation.

U.S. participation in the global deal, overseen by the Organization for Economic Cooperation and Development, is critical to its success.

So far, the international tax changes have generated less controversy among lawmakers than Biden’s domestic proposals, such as raising the corporate rate to 28% from 21% or a near-doubling of the capital gains tax rate for wealthy individuals. However, getting the global items passed means embedding them in the larger bill, which will require unanimity in the Senate Democratic caucus.

Treasury officials are privately worried that the international pieces could still face hurdles, according to a person familiar with the discussions. Biden has called for a 21% global minimum levy for U.S. companies operating abroad, but the preliminary OECD deal only calls for a rate of “at least 15%,” with the final number still to be determined.

Democrats have begun asking why the U.S. should force American companies to pay a higher minimum rate than companies in other countries, said the person, who spoke on condition of anonymity to describe private talks.

A global minimum rate below 21% would also raise less than the current projection of $533.5 billion. That means Democrats may have to raise additional revenue or cut some of their $3.5 trillion in proposed spending on child care, climate initiatives and education.

While Yellen may be able to get a global minimum approved through the Democrats-only bill, she can’t move forward on the global tax deal’s other component, known as “Pillar One” -- which overhauls the rules for where the profits of multinational firms are taxed -- without Republican support.

That part of the deal has even more details to be worked out than the minimum tax, which is known as “Pillar Two.” Yellen has said the administration won’t act until at least next spring before proposing legislation needed to make the U.S. compliant.

That portion of the global tax agreement will likely be presented as an international treaty, which, under the U.S. Constitution, would require two-thirds Senate approval, and thus need substantial Republican support.

“I don’t know why anybody would want to have some international organization determine the tax policy of the United States government,” said Senator Chuck Grassley, a senior Republican from Iowa who previously chaired the Finance Committee.

At the same time, Yellen is counting on several countries, such as France, to honor a commitment to repeal unilateral digital taxes aimed at U.S. tech companies. She also is betting U.S. businesses will appeal to Congress to approve the new taxation rules, because forgoing them would likely lead to paying taxes twice on the same profits.

Yet Pillar One might even be tough for some Democrats to swallow, according to Peter Barnes, an international tax attorney at Caplin & Drysdale. That’s because it’s a revenue loser -- unlike the global minimum tax, which should help preserve the U.S. corporate tax base. The administration may try to sell them together, but that could be difficult.

“When you’re measuring specific, measurable tax revenue losses against possible gains and a complete sacrifice of U.S. sovereignty, I have trouble seeing a path to success,” Barnes said.

Senate Finance Committee Chair Ron Wyden, a Democrat from Oregon, is ready to back Yellen up. He says his vision for international taxes “fits very well” with the secretary’s global goals.

Yellen needs the same level of commitment from 49 other senators -- maybe more.