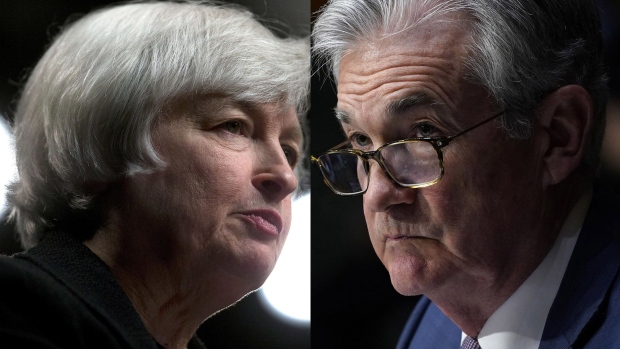 (Bloomberg) -- U.S. Treasury Secretary Janet Yellen defended Federal Reserve Chair Jerome Powell’s record on regulating the financial system amid attacks by progressives seeking to deny him a second term -- even though in the past she’s expressed some misgivings about rule-making under his watch.

While declining to say how she’s advised President Joe Biden on his decision over whether to reappoint Powell, Yellen told CNN’s “State of the Union” that financial rules had “markedly strengthened” under Powell’s term, as they did during her time at the Fed and under her predecessor, Ben Bernanke.

As the pandemic added stress to the financial markets, “the core of our financial system did very well because of the improvements in capital liquidity, risk management, stress testing,” Yellen said. “And those improvements have stayed in place during the Powell regime.”

Senator Elizabeth Warren of Massachusetts last month accused Powell of adding to financial risk by weakening regulation, calling him a “dangerous man” and saying she opposes him getting a second term at the Fed.

Progressive trade groups have also raised concerns that Powell would block more stringent banking rules if Biden reappoints him when his current term ends in February.

Before taking the job as Treasury Secretary, Yellen presented a more nuanced view of Powell’s record as a regulator than she did on Sunday.

“Some of the changes over the last three years or so that have been put in place are appropriate,” she told a Brookings Institution conference on June 30, 2020 in which Fed Governor Lael Brainard also took part. “But there are a number of things that in my view have gone too far.”

Brainard, who is seen as a leading candidate to replace Powell should he not be renominated, has dissented almost two dozen times against regulatory actions the Fed’s taken under his watch.

Yellen, whom Bloomberg has reported is supporting Powell for another term, referenced those dissents in her comments at Brookings, saying they showed cases where regulatory relief went too far.

The bulk of Powell’s regulatory moves benefited regional and community banks, which were released from the most stringent rules put in place after the 2008 financial crisis.

But Wall Street also benefited. The Fed freed the big banks from a requirement that they hold as much as $40 billion in margin for swaps transactions between a bank’s own affiliates. It also spearheaded an overhaul of the Dodd-Frank Act’s Volcker Rule, allowing lenders to boost investments in venture capital funds.

Powell’s Fed also simplified and reduced the frequency of living wills and revamped the annual stress tests of big banks.

Dennis Kelleher, president of the anti-Wall Street advocacy group Better Markets and a backer of Brainard for Fed chair, said in a statement on Sunday that Yellen’s defense of Powell’s regulatory record on CNN was “dead wrong.”