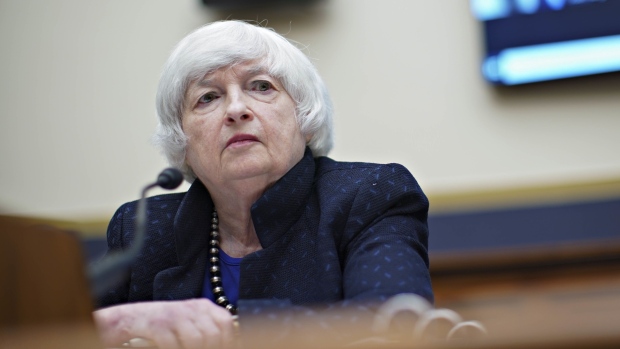 Janet Yellen, U.S. Treasury secretary, listens during a House Financial Services Committee hearing in Washington, D.C., U.S., on Thursday, Sept. 30, 2021. The Treasury secretary this week warned in a letter to congressional leaders that her department will effectively run out of cash around Oct. 18 unless Congress suspends or increases the debt limit. , Bloomberg

(Bloomberg) -- Treasury Secretary Janet Yellen said she expects price increases to remain high through the first half of 2022, but rejected criticism that the U.S. risks losing control of inflation.

She said on CNN’s “State of the Union” that inflation is expected to ease in the second half as issues ranging from supply bottlenecks, a tight U.S. labor market and other factors arising from the pandemic improve. The current situation reflects “temporary” pain, she said.

“I don’t think we’re about to lose control of inflation,” Yellen said Sunday, responding to criticism from former Treasury Secretary Lawrence Summers earlier this month, though she acknowledged that inflation has been higher than Americans have seen in a long time.

On Friday, Federal Reserve Chair Jerome Powell sounded a note of heightened concern over persistently high inflation as he made clear that the central bank will begin tapering its bond purchases shortly but remain patient on raising interest rates.

The S&P 500 Index posted its first decline in eight days. Powell said policies are “well-positioned” to manage a range of outcomes.

Yellen declined to say how she’s advised President Joe Biden on his decision whether to reappoint Powell. However, she said that financial regulation “markedly strengthened” under Powell’s term, as it did during hers and under her predecessor, Ben Bernanke.

She also said it’s “utterly essential” to raise the U.S. debt ceiling, reiterating earlier warnings about the consequences of a potential U.S. default.