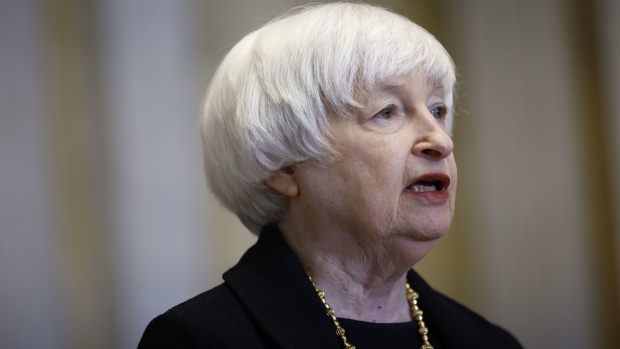 Janet Yellen, U.S. Treasury secretary, speaks during a news conference at the Treasury Department in Washington, D.C., U.S., on Thursday, April 21, 2022. Yellen anticipates steps to get Russia to help pay for rebuilding war-ravaged Ukraine, while saying that any move to deploy confiscated Russian assets for that effort would need to be considered carefully. , Bloomberg

US Treasury Secretary Janet Yellen is leaving Warsaw without a public pledge from Polish government officials to drop their opposition to a key part of a global corporate tax deal that Yellen identifies as a top priority.

Warsaw’s resistance is holding up a measure that would implement a 15% minimum corporate tax rate across the European Union -- part of an agreement backed in principle by almost 140 countries, including Poland, last October.

During talks with Polish Prime Minister Mateusz Morawiecki and Finance Minister Magdalena Rzeczkowska, Yellen “underscored the need to move forward on the global agreement on international tax reform, including a global minimum tax,” the Treasury said Monday in a statement after the gathering.

“Secretary Yellen committed to continuing to work together with Poland on this important initiative,” the statement said.

Yellen’s stop in Warsaw is part of a weeklong trip to Europe. Besides shoring up the tax deal, she’s seeking to bolster the alliance imposing sanctions on Russia over its invasion of Ukraine and to draw attention to a looming global food crisis caused largely by the war.

The tax issue is a priority for Yellen, who has been the force behind the fledgling deal since taking office in early 2021. She sees the package as a way to halt a long-term trend toward tax avoidance by the world’s largest corporations that undermines the ability of governments worldwide to invest in infrastructure, education, health care and other needs.

Poland last month was the lone EU member to vote against the measure, and Yellen is hoping to persuade Warsaw to drop its veto when EU officials meet again May 24. EU directives must be backed unanimously by member countries.

Morawiecki’s government has insisted the minimum tax be tied in a legally binding way to the second portion of the global tax deal, an agreement to reallocate taxing rights so that multinational companies pay more taxes in the countries where they generate revenue.

Poland’s Finance Ministry said in a statement Monday after the Yellen meeting that Warsaw is expecting a guarantee that the tax accord will see large companies paying taxes in countries where goods and services are consumed. Cooperation with the American side is crucial for the success of the process and the entire global reform, the statement said.

Delays for the tax agreement in the EU have worsened headaches for Yellen back in Washington, where Congress has also so far failed to pass a measure that would bring the U.S. into line with the minimum tax rules. Yellen is hoping that forward movement in the EU would prod US lawmakers to act.

The EU’s adoption of the minimum tax, Yellen said last week, would serve as a “good example” to Congress.

Yellen is scheduled to travel to Brussels later on Monday and then to Bonn on Wednesday for a meeting of finance ministers and central bank heads from the Group of Seven leading countries.