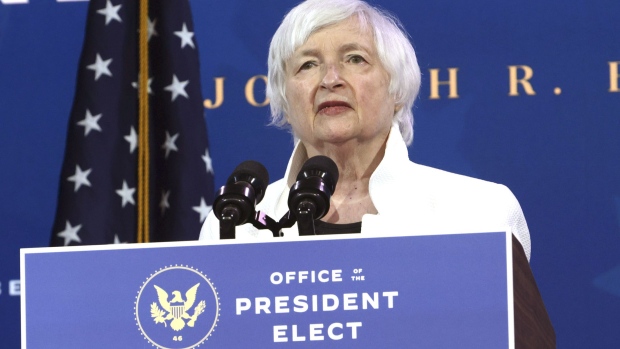 (Bloomberg) -- Janet Yellen has promised to make fighting climate change a priority as Treasury secretary, spurring hope among activists she will put the issue at the center of U.S. economic policy for the first time.

Yellen, President-elect Joe Biden’s nominee to lead the Treasury Department, has already endorsed a tax on carbon dioxide emissions and urged countries to set up independent councils that can pursue aggressive climate policies without political interference.

Advocates are appealing for her to go even further if confirmed, seizing her role as one of the most powerful people in finance to wield fiscal policy in the campaign against global warming. Some have outlined plans for how Yellen could trigger tighter regulation of oil and gas company finances under the Dodd-Frank Act -- even going so far as to require them to sell off fossil fuel assets.

“Yellen will have the power to help move trillions of dollars out of fossil fuels and trillions more into renewables,” said Jamie Henn, director of the non-profit advocacy group Fossil Free Media. “She could do more for the Green New Deal than nearly any other cabinet position.”

Yellen declined to be interviewed for this article. Biden’s transition team said the incoming administration intends to turn the threat of climate change into a way to bolster the economy and create jobs.

Yellen’s Treasury Department is expected to play a central role in that effort by helping shape stimulus spending to pull the U.S. out of recession and fulfill Biden’s promise to invest as much as $2 trillion on clean energy.

Both Biden and Yellen’s ambitions for big clean-energy spending could be constrained by Congress, where Republicans will hold at least 50 seats in the Senate. Conservatives have assailed congressional Democrats’ ambitions for a wave of spending to propel clean power and energy efficiency, including through expanded tax cuts and investments, as a socialist wish list.

Yellen’s interest in addressing climate change dates to her time in the Clinton administration, when she was the head of the Council of Economic Advisers. And she doesn’t mince words about the threat.

“It will have absolutely devastating consequences for humanity if we don’t address it, and time is running out to take the steps that are necessary,” she said in an October interview with Bloomberg News.

Climate change is already affecting energy investments, raising the risk that oil, gas and coal reserves will lose value or be barred from development as governments clamp down on the greenhouse gas emissions generated by burning fossil fuels. Even non-energy investments in commercial buildings and real estate are at greater peril with the encroachment of rising seas and more intense storms fueled by climate change.

Progressive Democrats argue that enlisting the Treasury Department in the battle against climate change is consistent with Biden’s plan to take a whole-of-government approach to the issue.

“The private sector won’t take this seriously unless the government takes a stand,” said Rhiana Gunn-Wright of the Roosevelt Institute.

Critics of the approach say Congress -- not the Treasury Department -- should take the lead in addressing climate change and the financial risks it poses.

“Significant new policy, like that addressing climate, shouldn’t be set by financial policy or any other statute that was never intended to address such a major issue,” said Kyle Isakower, a senior vice president at the American Council for Capital Formation, a free-market think tank. With legislation specifically designed to address the risks of climate change, “financial policy can play an appropriate role.”

Any aggressive moves would invite conflict with the U.S. oil and gas industry, which is already bracing for the Biden administration to tighten environmental mandates on drilling and block development on federal lands.

Some options, such as greater capital holding requirements for banks that have fossil investments, are “a terrible idea,” said Norbert Michel, director of Heritage Foundation’s Center for Data Analysis.

“If we are going to talk about a climate disaster where the Earth burns up, a bank holding an extra 2% capital or not lending to certain companies isn’t going to change that,” Michel said.

The Treasury Department can have global influence by charting new climate finance strategies through the Group of 20, the International Monetary Fund and the World Bank. Financing can be directed toward emissions-lowering projects overseas, with the Treasury encouraging the phaseout of fossil fuels subsidies as well as increased funding focused on closing coal plants.

Yellen in October joined former Bank of England Governor Mark Carney in urging governments to establish climate change councils empowered to confront the problem. The G30 Working Group led by Yellen and Carney emphasized that the scale of the challenge “means that carbon prices alone are not enough,” and must be buttressed by investments in low-carbon infrastructure and clean energy research.

“The secretary of the Treasury and the Treasury Department are crucial to the success of the administration’s efforts to move the U.S. and global economy to a low-carbon trajectory and to protect the economy from climate change shocks,” the three wrote in their blueprint for the agency.

Activists say one key platform Yellen will have is as head of the Financial Stability Oversight Council, which brings together the Fed, Securities and Exchange Commission, the Commodity Futures Trading Commission and other agencies. The panel can direct individual agencies and regulators to better address specific risks, such as global warming.

FSOC is “supposed to be a mechanism to force financial regulators to do their job” and address “emerging risks” and get “the entire financial system to focus on those, to regulate them better,” said Graham Steele, director of Stanford University’s Corporations and Society Initiative.

As Treasury chief, Yellen could push the council to develop recommendations for climate-focused financial regulatory reform and regulations. She also could encourage the FSOC to label oil and gas companies as non-bank systemically important financial institutions, or SIFIs, a designation that would trigger enhanced regulation and supervision by the Fed.

The Dodd-Frank Act requires the Fed to craft “enhanced prudential standards” for any designated non-bank SIFIs, and the council has the authority to recommend what the standards should be.

Applying such a designation could allow the Fed to require stress testing on the oil and gas industry -– with company portfolios evaluated under scenarios involving strict greenhouse gas emissions limits or rapid global temperature change. The Fed could use the findings to set capital limits and restrict fossil fuel investments on the basis of their prospective risks to financial security.

The idea has gotten a boost from corporate watchdogs and environmental activists, including the Evergreen Action group founded by former aides to Washington State Governor Jay Inslee’s presidential campaign.

Yellen, a former Fed chair who understands that governments and companies prefer certainty, said in the Bloomberg News interview that a “predictable path” is the best course.

It’s “not saying we need to tear down every power plant that still uses coal,” she said. “But when new power plants are built the incentives need to be there to do something that’s emits fewer greenhouse gases.”