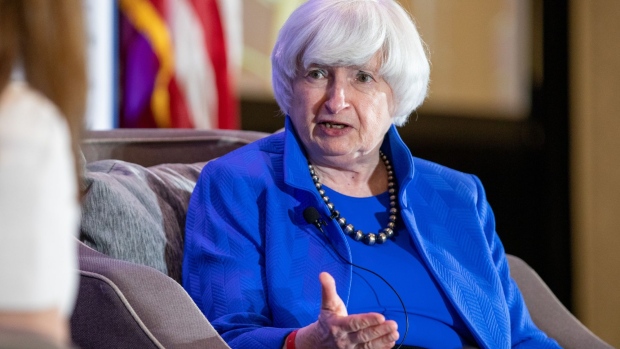 Janet Yellen, U.S. Treasury secretary, speaks during an interview at the National Association of Business Economics (NABE) annual meeting in Arlington, Virginia, U.S., on Tuesday, Sept. 28, 2021. Yellen today warned that her department will effectively run out of cash around Oct. 18 unless Congress suspends or increases the federal debt limit, putting pressure on lawmakers to avert a default on U.S. obligations. Photographer: Amanda Andrade-Rhoades/Bloomberg , Bloomberg

(Bloomberg) -- Exxon Mobil Corp. Chief Executive Officer Darren Woods was among a handful of corporate leaders who appeared on Treasury Secretary Janet Yellen’s calendar in the second quarter of 2021.

Yellen has made climate change a higher priority than any of her predecessors, and ExxonMobil is one of the world’s largest fossil fuel companies.

Yellen spoke on the phone with Wood for 15 minutes on June 29, according to records covering April through June that were released Friday by the Treasury Department. Treasury spokeswoman Lily Adams declined to comment when asked for more information about the phone call.

Yellen met with or spoke with several lawmakers from both sides of the political aisle and held multiple meetings with Federal Reserve Chairman Jerome Powell and Securities and Exchange Commission Chairman Gary Gensler during the period, the records showed.