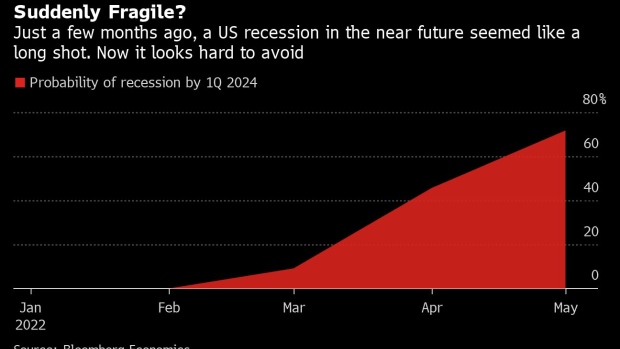 A customer fuels a vehicle at a gas station in San Francisco, California, US, on Thursday, June 9, 2022. Stratospheric Fuel prices have broken records for at least seven days with the average cost of fuel per gallon hitting $4.96 as of June 8, according to the American Automobile Association. Photographer: David Paul Morris/Bloomberg , Bloomberg

Treasury Secretary Janet Yellen said that “unacceptably high” prices are likely to stick with consumers through 2022, but that strong personal finances will stave off a recession.

“We’ve had high inflation so far this year, and that locks in higher inflation for the rest of the year,” she said Sunday on ABC’s “This Week.”

However, with the high stockpile of savings among Americans coming out of the pandemic and an “extremely strong” labor market, a recession is not “at all inevitable.” She said a gasoline tax holiday is “worth considering” if it could help consumers weather inflation.

US inflation accelerated to 8.6% in May, a fresh 40-year high that signals price pressures are becoming entrenched in the economy. Those figures dashed any hope that inflation was starting to ebb, prompting the Federal Reserve to unleash its biggest interest-rate increase since 1994.

The reasons behind stubborn inflation are “global, not local,” according to Yellen, who pointed to disruption in energy supply from the war in Ukraine and goods coming in from China where Covid-related lockdowns continue.

“These factors are unlikely to diminish immediately,” she said. “There are so many uncertainties related to global developments.”

Brian Deese, director of Biden’s National Economic Council, painted a rosier picture of the economy than Yellen and what Fed Chair Jerome Powell laid out last week. Deese referred to “independent forecasters” who “see inflation beginning to moderate over the course of this year.”

He also expressed hope that congressional passage of a bill that would lower the cost of prescription drugs, offer tax incentives for energy and other measures will take the pressure off of household finances.

“We have real strengths in this economy,” he said Sunday on CBS’s “Face the Nation,” citing high household savings and a jobless rate of 3.6%. He says the administration seeks to bring down inflation in a way “where we don’t have to give up all of those economic gains.”

Still, Fed officials on Wednesday forecast that a key price index would only increase in coming months, leading to the distinct possibility of another jumbo three-quarter percentage point increase in July.

Higher interest rates are seen driving unemployment to 4.5%, according to one Fed official.