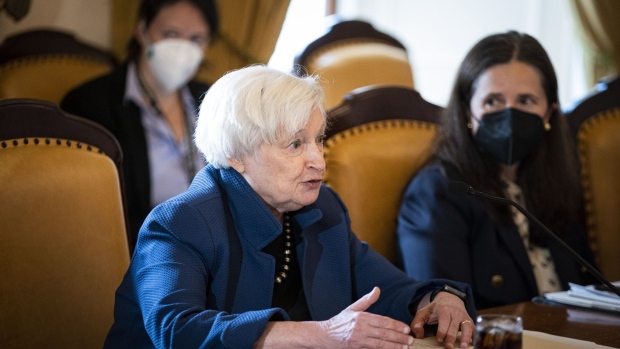 Janet Yellen, US Treasury secretary, speaks during a meeting with Luhut Binsar Pandjaitan, Indonesia's maritime and investment affairs minister, not pictured, at the Treasury Department in Washington, D.C., US, on Friday, Sept. 16, 2022. Yellen yesterday highlighted the Biden administration's plans for boosting the IRS, including efforts to dramatically increase the capacity of in-person and call-in support services. , Bloomberg

(Bloomberg) -- Janet Yellen, eager to see through crucial projects, has told White House officials she’s prepared to remain Treasury secretary well after the midterm elections, according to people familiar with the discussions.

Her desire to stay comes as White House staff begin to prepare for potential Cabinet and other senior personnel departures or changes -- including on President Joe Biden’s economic team -- after the November vote. People familiar with the matter characterized those discussions as preliminary and not guided by any expectation for specific departures.

The people spoke on condition of anonymity to discuss private talks.

There has been no indication of whether Biden, who will make the ultimate call on senior posts, wants any changes. Those decisions may depend on how well or poorly Democrats do in the election, where they are trying to retain thin majorities in the House and Senate. A new Treasury secretary would require Senate approval.

Yellen, 76, is keen to continue pursuing several top priorities she has spearheaded, including an international price cap on some Russian oil exports and an $80 billion modernization of the Internal Revenue Service, the people said. She’s also deeply involved in overseeing big investments approved by Congress into critical industries and green energy.

If she stays through next year, the ex-Federal Reserve chair would provide stability to Biden’s economic agenda should turmoil across energy and financial markets morph into a broader crisis, or if slowdowns in the US, Europe and China result in a global recession.

The White House work on potential personnel changes is preparatory, reviewing candidates in broad categories including economic, foreign and domestic policy, people familiar with the matter said. Officials don’t have a clear idea yet of who will go but are generally expecting turnover, the people said. They characterized turnover as common at this point in an administration.

Deese, 44, said Tuesday evening -- in response to a question about whether he aims to stay on for the next two years -- that he doesn’t plan to leave his post.

“I’ve got no plans to leave and I’ve got my head down and certainly fully, fully absorbed in what we’re doing,” he said during an event at the Economic Club of Washington.

Since Yellen took office at the start of the Biden administration in early 2021, Treasury watchers have speculated over how long she might want to remain in such a demanding post that caps a long career of groundbreaking government roles. Commerce Secretary Gina Raimondo, 51, is viewed among the potential successors.

Raimondo is happy at Commerce and busy implementing the administration’s semiconductor and broadband legislation, a department spokeswoman said in response to questions about a possible move to Treasury.

“While we are prudently planning for potential transitions, post midterm elections, neither Secretary Yellen, or Brian Deese are part of those plans,” White House Press Secretary Karine Jean-Pierre said at Wednesday’s press briefing.

While highly respected by economists and in international policymaking circles, Yellen has had frictions with some White House staff. Most notably, she irked Biden advisers by admitting publicly that her projections for inflation back in 2021 -- specifically that it would not remain high for long -- were wrong.

Read more: Janet Yellen Is Getting Trapped in the Blame Game Over Inflation (1)

Recently she was excluded from White House discussions around student loan debt relief because advisers didn’t want her inflation concerns to stifle progress toward what they saw as a political win, according to people familiar with the matter.

Yellen has repeatedly responded to questions about her future at the Treasury, including in interviews with Bloomberg News, by saying she serves at the will of the president and had no plans to leave.

Midterm elections traditionally precede an exodus of White House aides and some turnover in the Cabinet, especially if the president appears to be in political trouble. Some members leave voluntarily and presidents often see the two-year mark as an opportune time to shake things up.

(Updates with Jean-Pierre remarks in paragraph 14)