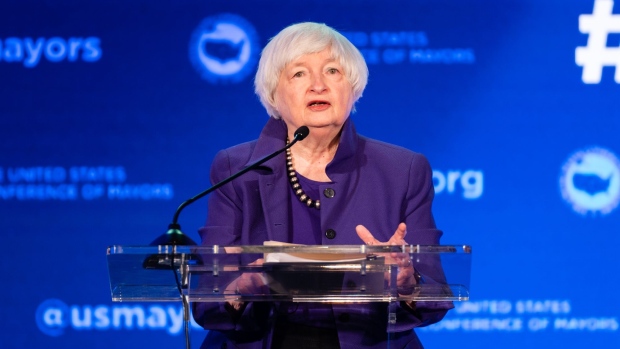 (Bloomberg) -- Treasury Secretary Janet Yellen offered a fresh description of the Biden administration’s economic policy approach Friday, casting it as one that borrows from -- but improves upon -- the Ronald Reagan-era conservative emphasis on supply-side economics.

“Our new approach is far more promising than the old supply-side economics, which I see as having been a failed strategy for increasing growth,” Yellen said in a speech to the World Economic Forum’s virtual Davos Agenda. “Modern supply-side economics seeks to spur economic growth by both boosting labor supply and raising productivity, while reducing inequality and environmental damage.”

Yellen’s attempt to redefine Biden’s economic agenda places it in terms that both credit and criticize concepts popularized under Reagan, the Republican president during the 1980s. It comes as Biden’s signature economic program, the 10-year tax-and-spending plan known as Build Back Better, remains stalled because of the lack of support from Republicans and a small number of moderate Democrats.

Yellen contrasted the long-term Build Back Better proposal with the $1.9 trillion pandemic-relief bill Biden enacted last March. That 2021 program was “similar to the ‘Keynesian approach’” of past fiscal stimulus programs, Yellen said.

The supply-side economics touted by Reagan and his acolytes called for smaller government, low taxes and less regulation -- all aimed at encouraging growth through private-sector investment.

“It is, unquestionably, important to properly implement regulation and maintain a pro-growth tax code,” Yellen said. “But they are not sufficient and can often be overdone.”

In particular, that over-emphasis, Yellen said, has left the U.S. under-investing in areas like infrastructure, education and workforce development -- hurting growth and driving economic inequality.

She pointed to the struggle of businesses to find available and sufficiently skilled workers to fill a record number of job openings.

“Potential GDP in the United States is constrained by a declining labor force,” she said. “And with few exceptions, productivity growth has been sluggish since the late 1970s.”

Criticizing generations of Republican moves to lower federal tax rates, Yellen said that “significant tax cuts on capital have not achieved their promised gains, and deregulation has a similarly poor track record.” She added that “this approach has deepened disparities in income and wealth by shifting the burden of taxation away from capital and towards labor.”

Such concerns explain the Biden team’s proposals to boost the tax take from the wealthy and corporations -- to provide more funds for education, training and child care that would raise skill levels and enable more women to work, Yellen said.

While the U.S. unemployment rate has tumbled, to 3.9% in December, the proportion of Americans age 25-54 -- considered in their prime working years -- who are employed or looking for work has failed to extend a partial rebound. At 81.9%, it’s well below the peak of 84.6% in 1999, pointing to structural challenges that Yellen said the administration’s proposals could help address.

“While the final details of a package continue to be discussed by the administration and Congress, the core of Build Back Better counters these trends by making it easier for working-age parents to participate in the labor market,” Yellen said.