Then-Federal Reserve Chair Janet Yellen opened the U.S. central bank’s October 2014 policy meeting with an unusual warning to Fed officials: Be careful what you say in public, especially when it comes to the U.S. dollar.

“By longstanding agreement, the Treasury speaks for the U.S. government on international economic policy and the dollar,” Yellen told the Federal Open Market Committee, according to a transcript of the meeting published Friday. “It is important to respect this division of labour by carefully limiting our remarks about exchange rates.”

Her comments followed a rapid rise in the dollar’s value against other currencies between July and October, a move that would extend into 2016 and have major implications for the global economy.

“We need to be careful not to ever inadvertently create the impression that we are somehow trying to jawbone down the value of the dollar,” she said, before laying out some guidelines for her colleagues to follow including what to say when cornered by a reporter:

“I would recommend saying something like, ‘I don’t have anything for you on that. As you know, the Treasury speaks for the U.S. government on international economic policy and the dollar’.”

Yellen’s successor, Jerome Powell is under relentless pressure from President Donald Trump to cut rates and weaken the dollar and continues to heed that advice.

A broad, trade-weighted measure of the value of the U.S. dollar against other currencies maintained by the Federal Reserve Board rose by 26 per cent from the start of July 2014 to the end of December 2016 as the Fed lifted interest rates from near zero, leaving counterparts in the euro zone and Japan behind. 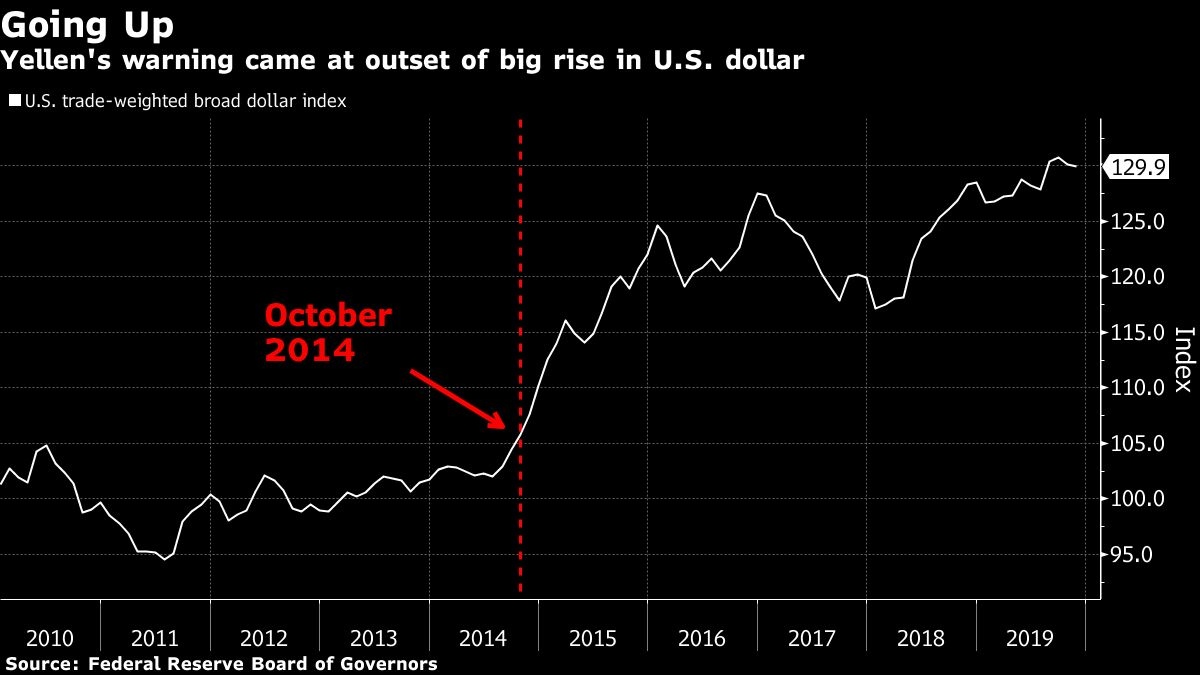 Yellen’s warning was part of a broader rebuke on the subject of public communications, which she said could confused the public and contribute to market volatility — a comment that still rings true in 2020.

“We have also traditionally emphasized in our communications the collegial, consensus-driven nature of the FOMC policy process, the fact that participants come to meetings with open minds and, after discussing the issues, come to a collective decision,” Yellen said.

This tradition “could be threatened by what strikes me as an increasing tendency for participants to take strong stands in public on ongoing debates about appropriate policy,” she said.

“If we stake out positions in advance of meetings and we have already decided that it doesn’t matter what our colleagues have to say, there is no real reason for us to meet at all. We could save travel expenses by phoning in our votes.”

Confusion sown by competing comments among Fed officials — the U.S. central bank has as many as 19 policy makers when all seven seats on the board in Washington are filled — has been an enduring criticism of the institution.

An academic paper presented at last weekend’s American Economic Conference by University of California Berkeley professor Annette Vissing-Jorgensen took a look at what she called “the communications arms race” among Fed policy makers.

She argued in a paper that Fed officials compete for the attention of financial markets because those who succeed in moving the markets’ policy expectations gain the upper hand in policy making. This leads to a cacophony of public appearances but also to a “quiet cacophony” of informal communication between policy makers and market newsletters or the news media, Vissing-Jorgensen said.