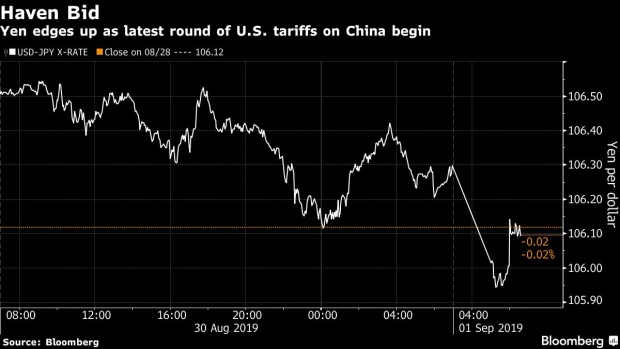 Stock futures pointed to a mixed start on Monday, when Treasuries and U.S. equity markets will be shut for the Labor Day holiday. President Donald Trump’s new tariffs on $110 billion in Chinese imports came into effect on Sunday, as did retaliatory levies by China.

Investors are still reeling from a volatile August that saw a collapse in Treasury yields and declines for global equities. A drop in the official China purchasing managers’ index on Saturday highlighted the pressure facing the world’s second-largest economy from weaker demand and escalating trade tensions with the U.S.

“There is a long way to go,” said Shane Oliver, head of investment strategy at AMP Capital Investors Ltd. in Sydney. “Share markets may still have to fall further to pressure Trump to resolve the issue.”

Elsewhere, Argentina’s government is imposing currency controls to halt the flight of dollars out of the country as it teeters on the brink of default. In the U.K., Boris Johnson all but sounded the election gun and told lawmakers from his party to back his Brexit plan or risk having to find another party.