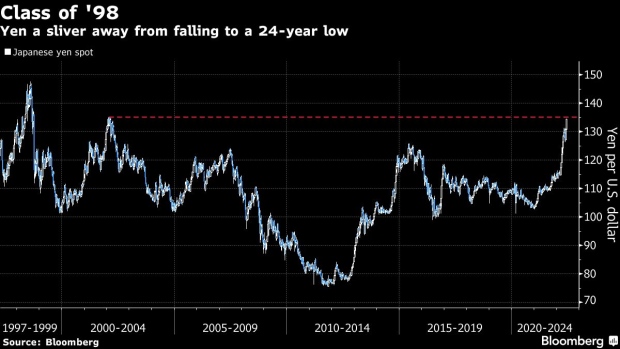 (Bloomberg) -- The yen is a whisker away from sliding to the lowest in about 24 years as investors ramp up short bets on Japan’s beleaguered currency.

The dollar-yen rose 0.2% to 134.46 in early Asia trading Thursday, less than one yen away from its 2002 high of 135.15. It’s the fifth straight day of declines for the yen, as the Bank of Japan keeps local yields capped to boost a moribund economy while US equivalents climb on rising interest-rate expectations.

“Ultimately, we think the fate of the yen depends mainly on monetary policy in the US and Japan,” James Reilly, economist at Capital Economics, wrote in a note. “We forecast the yen to depreciate to 140 per dollar over the coming months.”

Yen Tumble Continues as Weakness Spreads Beyond the Dollar